Tuesday’s Pick Of The Webs Biggest And Best 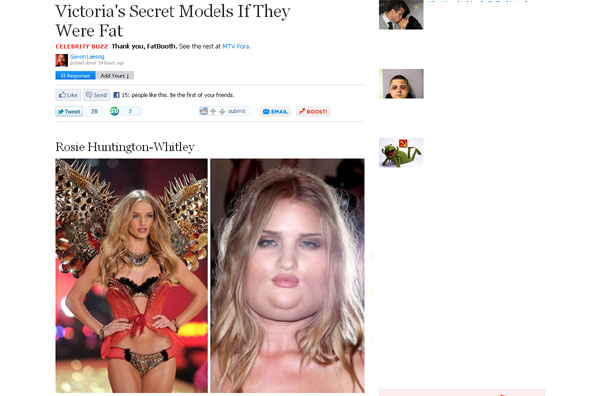 THE RISE OF THE COMPUTER MODEL (Laura)

Popular high street fashion chain H & M has been exposed as using digitally created models to front their latest fashion campaigns. Rather than opting for real models, the store has used computer generated models to achieve the perfect body shape to show off their clothing designs. Models are real however and have just been digitally placed on the bodies to create a realistic looking model. This is a bad move by H & M particularly at a time when other brands are striving to use real women in their campaigns and it makes the retailer look shallow an unconcerned over the effect that these digitally ‘perfect’ bodies could have on their female audience. Definitely a PR fail for me.
http://www.trendhunter.com/trends/computer-generated-models

SANTA HAS BEEN WATCHING (Aimee)

Want to cheer up (or creep out) your friends and family with a personalised Christmas message straight from the white bearded fellow’s mouth?  Now you can with this crafty website app Portable North Pole.  Simply provide a few little details and photograph of the lucky receiver and wait for the creative process to begin!  Check out what Santa had to say about me in this link and did the elves decide whether I had behaved or not this year?

Send it to all the Scrooge’s out there-they might even enjoy it.
http://www.portablenorthpole.tv/watch/gD9l_txRe9Wb1PBS3bPBRGA

A festive video called “The Digital Story of the Nativity” tells the tale of the first Christmas as it might be told today – through the eyes of social media platforms like Facebook and Twitter, as well as through popular websites like Google, Wikipedia and Amazon. Check out the link below and notice gems like Mary looking up ‘Holy Spirit’ on Wikipedia and plotting the route to Bethlehem using Google Maps, Joseph buying a cow and a donkey on Farmville and writing a post announcing the baby’s birth on his Facebook wall, the three wise men checking in to the manger via Foursquare, and more.

You may have already seen it as it was released last year but it never fails to make me smile.
http://www.youtube.com/watch?v=vZrf0PbAGSk&feature=player_embedded

This piece has brought a smile to my face this morning. As a girl we are getting a tad jel of these beautiful Victoria’s secret models with stunning features and bodies to die for. Someone has made my dreams come true with letting us see what these girls would look like fat. The magic of Fat Booth has allowed us to see the likes of  Rosie Huntington-Whitley and Miranda Kerr FAT! If I ever feel bad about eating a chocolate doughnut again at least I have a fictional outlet to make me feel better!!

A first of its kind smartphone for Islamic users has been launched which features a built in compass which constantly points to the direction of Mecca. Inventors of the Enmac phone said that they focused on religious technology in order to take advantage of the religious market that exists in India. India currently has over 180million Muslims in its population and the mobile market currently fails to penetrate most of these. The makers behind the new phone are hoping that by developing a phone specifically for these users that the market will come to them.. The tech and religion savvy phone also has the ability to translate the Koran from Arabic to 29 different languages and also provides daily prophet updates. On a more spiritual level it also provides a way for customers who lead busy lives to remain connected with God
http://www.dailymail.co.uk/news/article-2070397/Islamic-smartphone-launched-compass-permanently-pointing-Mecca-Koran-downloaded.html