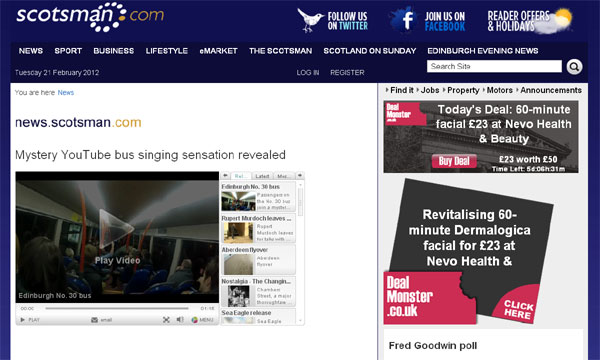 WOMEN CAN MAKE OR BREAK A BRAND (Laura)

A survey of 600 adults in the UK has revealed that it is the fairer of the sexes which hold more power when it comes to sharing brands they like on social media sites. 77.9% of women are more likely to share brands as compared to 74.2% of men. The figures may not be too far apart but considering that more men than women over the age of 18 use social networking sites it becomes even more interesting. The age old stereotype that women love to shop, seems to be reflected in these findings and brands should sit up and take note. Not only should they ensure that they appeal to both sexes, but they should ensure that their content is as sharable as it possibly can be.
http://www.thedrum.co.uk/news/2012/02/21/infographic-women-3-more-likely-share-about-brands-social-media

CROONER ON THE BUSES (Gaynor)

It’s not often you get a live show on a Lothian bus so you would have been very lucky to have been a passenger on the Number 30 bus earlier this month. David McKenna gave passengers a great laugh when he started renditions of Flower of Scotland and My bonnie lies over the ocean on the bus. The bus conductor had been on a rare night out on the town when he opted to do some singing on the bus home. The video is great and really shows Edinburgh locals having a real glee moment. Enjoy!
http://www.scotsman.com/news/mystery_youtube_bus_singing_sensation_revealed_1_2129382

ARTISTIC PRESS RELEASE STANDS OUT FROM THE CROWD (Rachel)

I came across this unique press release on Twitter which has been circulating many blogs and websites. Australian cartoonist Pat Grant has taken a very creative approach to press release writing by deciding to turn it into a cartoon. The witty cartoonist explains what his new graphic novel ‘Blue’ is all about in the style of a Hollywood elevator pitch before going on to provide a quote about the book from his Auntie Florrie! Fingers crossed this quirky attempt to capture the attention of Australian journalists and book companies. If the comic is anywhere near as good as the press release then I’m sold!
http://prexamples.com/2012/02/the-best-press-release-in-the-world/

I always feel that the most talented people are sometimes those who are never discovered. There are plenty of street artists who are highly skilled in what they do but never seem to get credited as much as a world class artist. When you go abroad and especially in Asia, on the streets is where you will find the real raw talented people and this video proves my point.If you have ever watched a cookery show and watched the chef make a caramel basket to go over a pudding you can appreciate that its pretty difficult but I would like to see them create a dragon lollipop using hot caramel. The amazing thing for me in this video is that he has to basically create this lollipop in one stages but they have to be in one movement and there is no place for errors. Have a watch and see if he impresses you as much as he did me.
http://www.videofy.me/amazingvideos/404001

Here is a video from a very talented young lady from Grangemouth. Miriam Wolanski created Wolanski’s Pole Fitness in 2007 and has been tirelessly campaigning to change the image of her profession from pole dancing to pole fitness ever since. In this video, taken at her Pole Showcase last year in Falkirk, she demonstrates the strength, skill and flexibility it takes to elegantly manoeuvre around the pole. It’s much harder than it looks! Miriam is currently planning her next show which will have a circus theme and will take place this summer. With a one hour class of pole fitness burning the same number of calories as 3 gym sessions, now is the perfect time to find a pole fitness class to tone up for the summer!
http://www.wolanskispolefitness.co.uk/