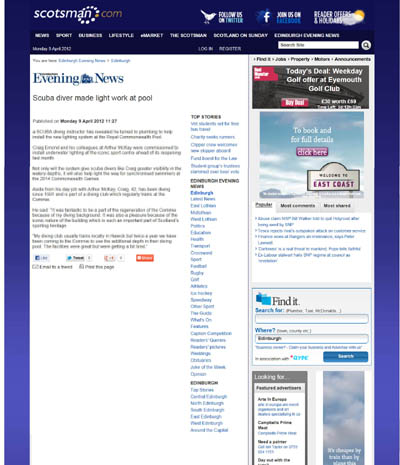 A tradesman who moonlights as a scuba diving instructor found himself in for a treat after working on the new Royal Commonwealth Pool.

Craig Emond, who works for Arthur McKay was delighted when the building support services company was chosen to install underwater lighting at the iconic Edinburgh pool.

As well as lighting up the final training bases for Olympic hopefuls, Arthur McKay’s lighting will light the way for the synchronised swimmers at the Glasgow 2014 games.

Craig who has been taking his diving club at the pool for ten years said: “It was fantastic to be a part of the regeneration of the commie because of the iconic nature of the building which is such an important part of Scotland’s sporting heritage.

“My diving club usually trains locally in Hawick but twice a year we have been coming to the Commie to use the additional depth in their diving pool. The facilities were great but were getting a bit tired.”

This coverage was secured with the Edinburgh Evening News as a part of a sustained public relations campaign by Holyrood PR on behalf of Arthur McKay.