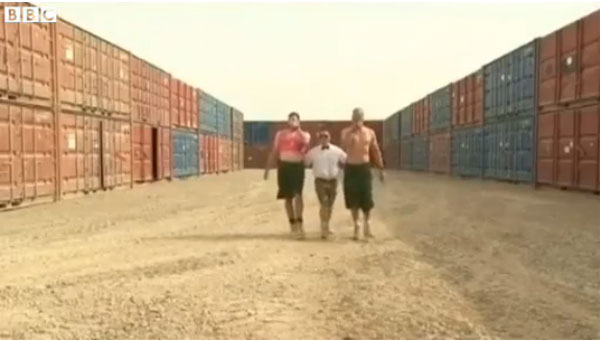 Living in a remote dust filled army base must be pretty boring at times so some British troops have filmed a music video to amuse themselves.
Soldiers from 7 Headquarters and Support Squadron based at Camp Bastion in Afghanistan decided to prance around to worldwide smash, Gangnam Style by South Korean music sensation, Psy.
So not just to embarass themselves for no reason, the lads are raising money for Swaledale Mountain Rescue Team.

Ever seen Gossip Girl? Or even better ever read the books? Well, for the uneducated among you, the premise is a gossip website to which people upload information and photos of the ‘in-crowd’ in New York’s Upper East Side. Things like who’s been sleeping with who, pictures of someone kissing someone other than their girlfriend, a teenager smoking a joint, you get the picture. Now imagine a ‘gossip girl’ Facebook page dedicated to…wait for it…Heriot Watt University library. This page has about 1000 likes and may not have a long life expectancy, but some of the comments are priceless. And for all of you at Heriot Watt looking for a better and perhaps, although this cannot be guaranteed, more studious other half, ditch the dating website subscription and head to the library. Oh, and if you’re the guy who got caught shamelessly snot-balling into the sink in the silent floor toilets, someone thinks you’re a vile creature.

I don’t know about you but I’m already a little bored of Christmas songs, no matter where I go I can’t seem to escape them. Don’t get me wrong, I love a Christmas jingle at the best of times but when you have to endure them for three or four weeks before you can even start to think about enjoying the festive period, it makes them loose their appeal.

Anyway, with the week that’s in it leading up to Christmas I’m heading back to the Emerald Isle on Thursday I have to admit that I’m feeling rather festive now. I’ve been completely digging all the Christmas related jingles, decorations and fashion.

So if you’re a little tight for time this year and want to get into the spirit promptly have a wee listen to this genius song. Compiled by Brett Domino, the 16 minute medley boasts 40 songs in one, I’ve listened to it twice this morning already – says it all really.

There has been recent fashion trend for cut out dresses, with symmetrical bits cut out of sides and backs, sometimes covered in lace, sometimes not, providing small flashes of flesh to passing eyes. I have seen many of these creations, in all colours, with varying amounts of material or lack thereof. Despite this, nothing quite prepared me for the Robyn Devore Dress from All Saints. This dress, when seen off the model looks, if not demure, at least relatively sensible, with what appears to be gray panelling. However, on the model this is no longer a dress – it is a range of censor strips covering, only just, the bits you most definitely do not want your boss to see at the Christmas party. Anyone who wears this out, EVER, is braver than I ever plan to be.

According to some interpretations of the Mayan Calendar we’re all in for it this Friday.
If you’re a believer, then why not start preparing with a dose of bitterness and venom and join the Daily Mash by giving 2012 the middle finger.
Another great article full of satirical punch from the daily news site summing up what has been another year of highs and lows – particularly where Jimmy Saville is concerned.