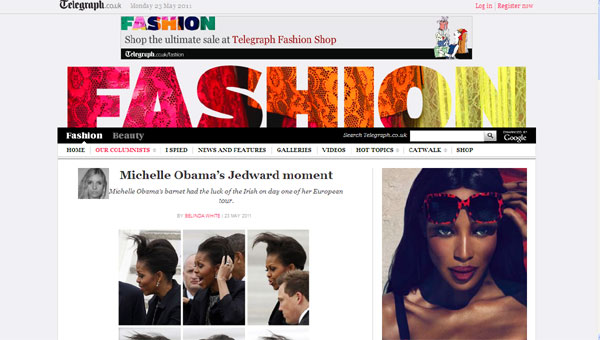 Featuring only the best links reminiscent of some of the best penned songs with none of the cheesiness of a Beiber pop anthem are our top fve links of the day. But which will be your number one link? Why not tell us on our Facebook and Twitter pages and feel free to submit your own link into the charts!

JEDWARD BREAK INTO THE USA…(Linsay)

…No wait it’s just Michelle Obama after being caught in a rather unfortunate gust of wind. The usually impeccably styled first lady was pictured looking slightly wind beaten and shockingly like the Irish duo on the first day of her European tour, which believe it or not started in Dublin! Lets hope she find some luck of the Irish for the rest of her trip and she can return to her flawless best.

EVEN HITLER HAD TO ASK THE BOSSES FOR TIME OFF (Laura)

He is famed for being one of the world’s strictest leaders being responsible for one of the most severe regimes noted in history, but it seems that before Hitler became a force to be reckoned with even he had to ask his bosses for time off. A letter signed by Adolf himself asking for time off work so that he could fight for presidency of the Reich, has gone up for sale today and it is expected to make more than £5,000. The outcome of the letter although seemingly harmless at the time, probable had a pivotal role in the mapping of history, as if the future dictator had used up all his holiday allowance, we might never have had the devastation of the world wars and avoided the unnecessary holocaust genocide.

SHE SOLD THE WHOLE OF THE MOON (Adrian)

There are plenty of times when we see weird and wonderful items sold by people across the world – and they always find a buyer. Whether it’s an image of Jesus in toast or the awful hat Princess Eugenie at the recent Royal wedding, people will often pay top dollar for the bizarre.Unfortunately for one woman in the United States, however, an attempt to sell an unusual item has led to some very hot water indeed. The Californian lady was caught in a sting operation trying to sell a chunk of “moon rock” for more than $1 million, and is currently being questioned by the feds over where it came from. The problem is, you see, that moon rocks are considered national treasures and their sale is illegal in the States. Oops…

Rumours have been circulating the tech camps over the last few days about what the new 5th generation iPhone will look like and if they are true it looks set to be one of the best looking phones available in the market place. Possible features include a curved screen for better viewing and a state of the art camera with LED flash and lens spread further apart to allow for optimum photography.

A sad tale from over the weekend that thankfully didn’t get missed by the UK papers was the death of one of pro-wrestling’s greatest-ever performers – “Macho Man” Randy Savage – who suffered a heart attack in his home town in Florida. One of the squared circle’s most unique characters, the perma-bearded Macho Man was a top icon of the 80s and early 90s. Along with Hulk Hogan, he helped shape the world of wrestling from a grubby working class pastime into the glitzy multi-million dollar industry it is today – dazzling audiences with high-flying moves, flamboyant clothes and his trademark “Ooh Yeah!” catchphrase. He was also an absolute nutter, which probably added to the draw of his character for many fans. RIP Macho Man. You’ll be sadly missed.