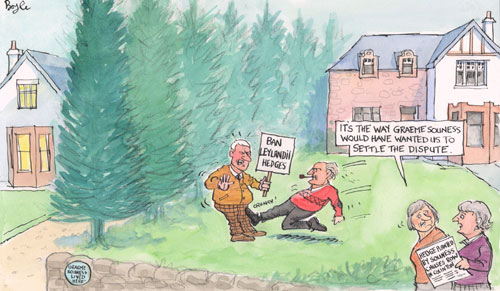 Ever since we started to provide support and Scottish PR advice for campaign group Scothedge, we’ve noticed a lot of interest gradually emerging about their struggle against high hedge disputes.

It’s been a challenge at times – not least trying to explain to various journos and news editors that, no, this isn’t just a case of Nimby-ism and that, yes, there isn’t any law in place to protect victims of so-called hedge rage. But over the past couple of months, we’ve been delighted to see many of Scotland’s major newspapers and TV companies running with great pieces of coverage on the campaign.

When the story first made the pages of the Edinburgh Evening News, we were even fortunate enough to be the focus of a daily cartoon by the newspaper’s brilliant cartoonist-in-residence Frank Boyle – which we immediately posted up on our website.

Now Boyle’s cartoons are one of the highlights of the Evening News and have rightfully won the great man a couple of Cartoonist of the Year gongs at the Scottish Press Awards over the years. As a reporter, it was always seen as a stamp of approval to have one of your own stories as the basis for a Boyle cartoon and I was fortunate enough to have had a couple over the four years I spent as an Evening News hound (although I never received a framed print of one when I finally left – unlike some of the more illustrious allumni)

However, when we received an e-mail the other day from none other than Mr Boyle telling us that he’d seen a reproduction of one of his drawings on our website, we were naturally a bit worried. Was he going to demand we take it down or, worse still, take us to the cleaners for the inappropriate use of his copywrited image?

Well, no not really. Rather than pushing any toys out of the pram or threatening to sue, Frank’s note was politeness personified. He thanked us for bigging up his creative talents and providing a link to his site, but added that he was a bit disappointed by the poor quality of the image we’d reproduced…..so he sent us a brand new version to use instead, which is at the top of this page.

Top work Frank, and a pleasure to see that you’re still sending up the politicians and celebrities – both local and national – as well as providing a great, twisted view on Edinburgh life in general. I hope it continues for many years.