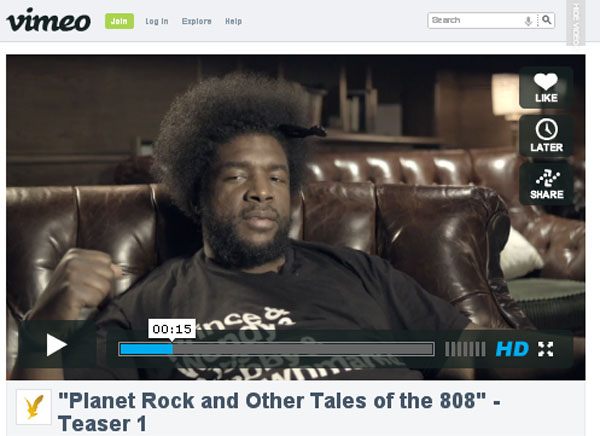 Got plenty to share? Aye well so do we so check get in touch with Facebook or Twitter…or both!

I checked out new music blog, Noise Made Me Do It, which then led me to an up and coming documentary which is well worth a watch for everyone who loves their ears pricked with a touch of self inflicted tinnitus!
“Planet Rock and Other Tales of the 808” is set to lay down how the Roland TR-808 set the musical world alight starting with Afrika Bambaataa’s Planet Rock which still sounds amazingly fresh after 20 years!
Check out the trailer:

According to a survey, women feel their sexiest at 28. Three quarters of British women said they would not change their body shape if they were given the opportunity and the body part women are most proud of is their eyes, with 23 per cent saying that they felt it was their best physical attribute. 41 per cent of women would like to have longer, slimmer legs, and it seems that self-confidence is harder to build that body confidence as half wish they could stop worrying so much about their lives. And the people who inspire women the most? (Apart from me, obviously) is Kate Middleton with 19% of women voting for her, followed by Florence Nightingale (probably not for her fashion sense; with 17% of the vote) and the iconic Marilyn Monroe, with 15%.

Did you know it rains 265 days a year in Scotland? This is probably a very rough average (I found it on a dubious ‘question/answer site – probably written by someone in Utah) and I am unsure of the stats for this year, but I imagine it has probably been at least 50 days more than this figure. Anyway, suffice to say it rains a lot in Scotland. A LOT. So, with that in mind, my High Five for today revolves around umbrellas. And not just any brolly, but fancy – ‘I can project a movie to play on the inside of my umbrella’ – kind of brollies. If you, like me, are finding it increasingly difficult to bear the rain, then check out this link for some ways to make at least sheltering form it, a little bit more exciting.

I’m sure like me you are sick of hearing these adverts on TV about companies claiming to get you thousands of pounds from being mis-sold PPI? It’s a topic which has graced the news channels for the past couple of years now and it has just been announced that four of the largest high street lenders will be providing more budget which will be set aside to pay out for any future claims. With nearly £8bn set aside already analysts are predicting that there could be potentially £10bn to be had. If anyone is considering claiming your best bet is to do it yourself. Fortunately a brand new app has just been launched for this, DIY PPI app and is available on the app store now- best way of trying to get your hands on some of this wonga!

NOW THIS IS A DRESS WITH REAL-A-PEEL (Alix)

It seems that Lady Gaga wasn’t the first person to wear dresses made out of food. A photo has been released from a 1939 edition of National Geographic, a young woman poses in a geometric dress made entirely out of grapefruit peels. The dress was handmade in celebrate of Rio Grande Delta’s harvest season during the beginning of spring. Vegetable trim was also used in the finer details of the edible dress. I think the dress looks a bit like snake scales, but in a more stylish, wearable way obviously. I wonder if the dress has its own citrus smell… would save you time and money putting on perfume, that’s for sure. I’m going to start saving up orange peels.