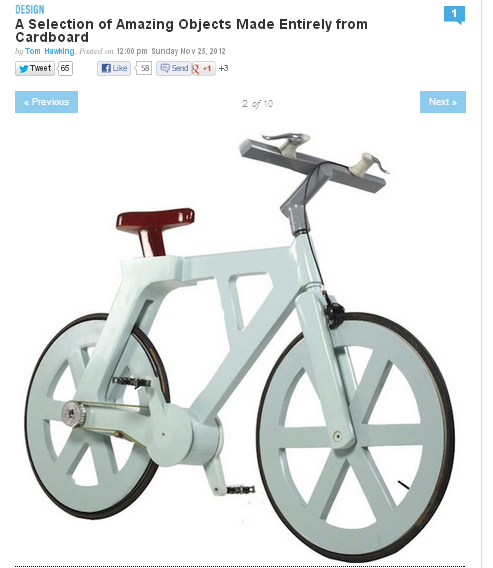 NO REASON TO BE BOARD (Louisa)

Whether you are on a tight budget or not why not get creative with cardboard? From bicycles to clothing designers are coming up with new innovative ideas for this everyday material.
It may not be the most durable of materials but at least your friends will give you credit for being creative as well resourceful.
http://www.flavorwire.com/349662/a-selection-of-amazing-objects-made-entirely-from-cardboard#4

After having my hair drastically changed last night I know that it will take a while to get used to. I’m not the only one who has had a change recently, Kate Middleton has also had a hair cut which is probably not as drastic as mine but probably in her mind it is. However if she ever wants to know what she’ll look like with ‘bangs’ or a fringe to us Brits, Buzz Feed has done the work for her by putting her face on famous celebs with fringes. I personally like her on Christina Aguilera, is it just me or does she look like Lil’ Kim?
http://www.buzzfeed.com/whitneyjefferson/kate-middleton-with-famous-celebrity-bangs

What’s your method of subtly hinting to your loved ones what you want for Christmas? A strategically placed John Lewis catalogue, open at a page of scarves or blenders, usually does it for my mother, whereas my father’s request for socks is more direct and verbal. According to the Huffington Post, however, the most contemporary way to sort out who wants what this festive season is by simply checking their Facebook and Twitter pages. According to an OgilvyAction report 43% of Brits will respond to what their family and friends have asked for on the social media sites. Well, this makes telling your boyfriend/girlfriend what present you actually want a lot easier. Unless it’s sexy underwear, in which case I suggest you private mail him/her instead. It may not be as subtle, but it’ll avoid that awkward moment where the creepy kid who fancied you in high school, turns up at your door with the same gift.
http://www.huffingtonpost.co.uk/2012/11/28/social-media-being-used-to-buy-and-request-christmas-presents_n_2205152.html?utm_hp_ref=uk​

POP YOUR STRESS AWAY (Victoria)

If the stress of city living is getting you down, then perhaps popping some bubble wrap may help relieve your worries and tension.  An artist in Milan, Italy has created a public stress relief station at a bus stop which dispenses bubble wrap in different sizes – and was even kind enough to label each piece with the time taken to pop so you can fit it into your busy schedule. Hey, it might not be as good as a massage, but it’s a nice diversion when you’re on the go!
http://laughingsquid.com/bubble-wrap-public-stress-relief-station-by-fra-biancoshock/

Metro Trains in Melbourne took an innovative approach to their recent train safety warning campaign. Seemingly many youths are unaffected by traditional shock warning adverts, so the clever clogs at Metro Trains came up with a fresh way to approach the issue.
They created a quirky cartoon entitled Dumb Ways to Die which illustrates a number of curious little characters dying in a variety of ways.
The animation along with a catchy tune highlights that scratching a drug dealer’s brand new ride and selling your kidneys are pretty ridiculous ways to depart this life.
Since the video was posted on the 14th November it has already reached over 28 million hits and inspired an array of imitators.
http://www.telegraph.co.uk/news/newsvideo/weirdnewsvideo/9706822/Train-safety-cartoon-Dumb-Ways-to-Die-becomes-a-online-hit.html  ​