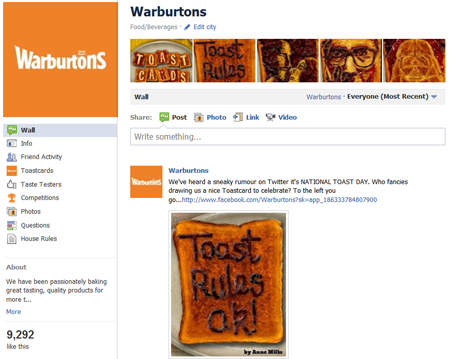 If today’s Holyrood Fives hit the spot, let us know by tweeting us or writing on our wall.

My colleague Laura saw on Twitter that it is (apparently) national toast day today – what a great excuse to enjoy a couple of slices smothered in butter and jam!  If you are on a health kick or do not have access to toast making facilities then do not fear, there is a way to celebrate this delicious holiday after all!  As part of an £8.2m marketing campaign by BETC London, Warburtons have launched a new Facebook app which allows you to create a virtual piece of toast with a personalised message on top.  You choose your flavour of jam, spread it around and using the knife you can be as artistic as you wish! Once your toasty masterpiece is complete, you can submit it to the gallery for the chance to win a luxury breakfast hamper.  Another fantastic use of social media to encourage consumer interaction!
http://www.facebook.com/Warburtons

This is great story captured on video; Bermudian Johnny Barnes is an 88 year old man who gives morning commuters a reason to smile in the morning. The short film which has won several awards shows the lovely old man standing at the side of a roundabout in Bermuda wishing people well on their journey to work. Johnny does this for six hours every day and has become one of the islands most cherished citizens. If you’re ever in town you can catch him from 4am to 10 am at Crow Lane roundabout just outside Hamilton in Bermuda.
http://vimeo.com/36673515

We all remember the horror stories about pirates making their victims walk the plank into treacherous seas to their ultimate death. But this story from the Scottish waters deals with a plank of different sorts. ‘Planking’ as most of us know it became a social media hit with hundreds of pics showing people lying flat in unusual spots and an Orkney lifeboat crew member has been told off from rescue chiefs after his pictures emerged. Decked out on top of a £2 million lifeboat, his picture was posted on the Planking Scotland Facebook page which ultimately got him a telling off and the picture has since been removed.The planking craze which began in Australia continues to tempt Scots take part in the often dangerous activity. One planker claims to hold the Scottish height record of 1,344m-by planking on top of the Ben Nevis. Proud tae be a Scot or wit!
http://www.deadlinenews.co.uk/2012/02/15/lifeboat-man-in-hot-water-over-planking-picture/

AN American photographer is in the process of creating the world’s largest camera measuring 35 feet long! The mammoth machine will take pictures up to six feet wide, recording images in such fine detail that you will be able to see every pore of a person’s skin. Dennis Manarchy will develop the camera – currently in its prototype stage – and travel with it across America to create what he hopes will be the most detailed tribute to the American people. It is planned that the images will then go on display in stadiums and possibly as part of a street gallery, which will also be the first of its kind. A great idea and some beautiful pictures produced – my only concern would be how I would reach the shutter button?!?
http://www.dailymail.co.uk/sciencetech/article-2101561/Photographer-Dennis-Manarchy-builds-supersize-35-foot-camera.html

SEX SELLS ON THE BUSES (Gaynor)

Deodorant brand Lynx has come up with a clever way to show how the ‘Lynx affect’ can improve your sex life. After showing the initial advertising campaign for the new Attract deodorant for both sexes, Lynx have put together a fly on the wall like video showing couples who used the deodorant snogging the faces of each other. The most hilarious thing is watching the public react to what’s going on around them. A brilliant way to generate buzz and get people talking!
http://www.campaignlive.co.uk/news/1117242/lynx-attract-spreads-the-chaos-buses/