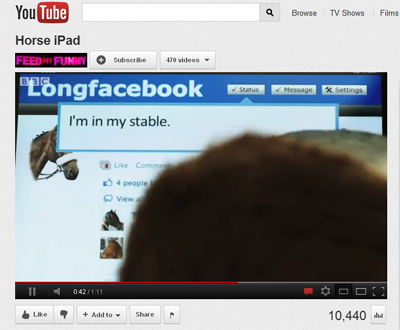 Make sure you like us on LinkedIn and connect with us on Google+ to keep up to date with all of our news!

BBC Three have produced a spoof advert of an alternative iPad in response to Apple’s over hyped announcement of the upgrade yesterday which really made me chuckle.
The funny short by comedy team The Dawson Brothers introduces a new product produced in the typical Apple style, to target horses.
It features a horse navigating the iPad with it’s hoof, reading Black Beauty on iBooks, logging onto ‘Longfacebook’ to chat to it’s friends and using the equestrian version of Siri.
If like me, you were disillusioned with Tim Cook’s presentation yesterday, then check out the following link:

I absolutely love Sex and the City so when I went to New York for my 21st I couldn’t resist going to have a sneak peak at Carrie’s Apartment. Whilst many people think she lived on the upper east side her actual apartment building was on the lower west side. Perry Street, in  Greenwich village was the setting for Carrie’s many late night rendezvous with Mr Big and I was delighted when I got my picture taken on the steps of the building. Now to my delight her apartment on Perry Street is up for sale for a cool $9.65 million. The only disappointment if any the apartment is not the same on the inside as it was on the show as it was obviously a set. Also you’d think with that big a price tag like that you would get Carrie’s fabulous wardrobe included- SO WRONG!

NOW THAT’S A BOSS WHO MAKES AN IMPRESSION (Scott)

Imagine if your female boss was a glamorous, billionaire, entrepreneur – who was quite happy to get topless in the boardroom. Welcome to the wacky world of Spanx founder Sara Blakely, who at 41 has just joined the Forbes rich list. Like all the best corporate America success stories, hers has all sorts of angles – from her fear of flying to her, ah, colourful, ex-rapper husband. A fascinating read.

A Hearts mad dad has started a facebook campaign to allow him to give his unborn son the middle name Hartley after player Paul Hartley. While the name may seem innocent enough, Grant McDermid’s partner has insisted he can only name his son this if he gets over 1,000 like of facebook by the end of the month. So far Grant’s page has amassed 616 likes which leaves under 400 more to go before the babies due date April 2nd – which just so happens to be the sixth anniversary of the Hampden Park semi-final derby which Hearts won 4-0, paving the way for their Scottish cup victory. I think Hartley is an innocent enough name and that his missus should let Grant have this one it can’t be as bad as some of the really bad celebrity kids names such as Apple, Princess or Harper Seven!

Of all the strange things sold on online auction sites, this has got to be up there with the very strangest – a frozen McDonalds chicken nugget which (wait for it) sold for £5,000.  However, this is no ordinary chicken nugget.  Apparently it resembles the first US President, George Washington.  Rebekah Speights put the chicken nugget up for auction last month and surprisingly, a bidding war quickly ensued.  The frozen nugget attracted over 70 bids and eventually sold for the incredible sum of £5,000.  Personally I don’t see the resemblance, or understand how someone could spend that amount of money on a chicken nugget.  However, at least the money is going towards a good cause – the seller is trying to raise money for her local Family Worship Centre and the money she made from the “presidential poultry” will make a substantial addition to her funds.