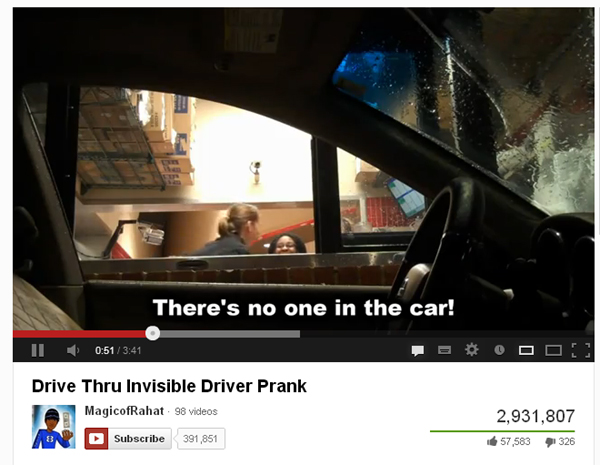 Were you as shocked as we were at the state of Detroit? Laugh at the invisible drive through prank? Let us know on our Facebook or Twitter pages!

This great prank video just goes to show that with a little time and effort you can make a viral hit. This video was only posted 2 days ago and it has already accumulated well over 2 million hits.
At the start of the video we are introduced to the driver and his costume of a driving seat he has made, he then shows us what it looks like inside the car, and to the unsuspecting onlookers, there is nobody in the car. So when he decides to pull up to a drive thru window, the worker is left scared and confused. This is a great prank and it looks as if the creator is looking to make more of these.
http://youtu.be/xVrJ8DxECbg

I was absolutely distraught when my iPhone went walkabout a couple of weeks ago on Princes Street. Luckily I had the software ‘Find My iPhone’ installed which meant I could track where it was and send a message to the phone with a contact number.
The whole process was pretty nail biting, as it would have been very easy for the finder to make a quick buck, and it certainly crossed my mind that I may need to use the software to track my phone down and take it into my own hands.
But thank goodness it didn’t come to that as a Good Samaritan called and arranged for me to pick it up and so it was soon back in my hands.
A man in San Diego did exactly this after his iPhone was swiped at a concert and it ended in a bloody confrontation which was caught on camera.
Kenneth Schmidgall tracked his phone down until he narrowed it down to a man riding a bicycle – who he fought in a skirmish for 18 minutes, eventually resulting in both men being tasered by an off duty policeman.
Be careful, kids!
http://www.nydailynews.com/news/national/fight-stolen-iphone-caught-tape-article-1.1236263 ​

Ever wondered how to make an entire country eat more fish? Apparently the answer is dancing human sushi…well according to the Norwegian Seafood Council it is. In these adverts aimed to encourage Norwegians to eat more fish, an ‘awkward performance group’ act out sushi recipes through interpretive dance. There is a different advert for each recipe so you can learn how to make several types of sushi from Maki to Sashimi. Although humans in Lycra suits does not make Sushi look particularly appetising these bizarre adverts make for some good viewing!
http://adsoftheworld.com/media/tv/norwegian_seafood_council_sashimi

Detroit used to be a vibrant, productive and one of the most wealthy cities in the U.S. Now it looks nothing less third world city smack bang in the middle of America’s heartland. Thousands of buildings, many once boasting beautiful architecture, now lie crumbling in the streets and surrounded by decay and ruin.
It’s pretty hard to watch and for those who still live close to the city centre who once basked in the city’s vibrancy, it must be devastating. But the shocking images of buildings which thousands populated like the library, school and police station where signs of human life remain are fascinating.
I could literally watch these clips all day because I find myself drawn to the eeriness of the images.
http://www.youtube.com/watch?v=iTxeCkUiHhs​

When my sister and I were aged between two and four, we came down one Christmas morning to find a huge, custom built dollhouse from our Dad sitting beside the tree. To this day I do not think I have had a Christmas present to trump it, although aged seven and living in France, I tasked my Dad to help me make construct a smaller dollhouse of my very own. This may seem like a completely random ramble, but what set me off was an article in on Buzz Feed which described a custom dollhouse made inside a guitar. Created by Australian miniature maker Lorraine, of Fairy Meadow Miniatures, for her daughter, this magnificent and intricately stunning piece of childhood memories really tugged at my heartstrings. Note to self – have kids, learn to make stuff.
http://www.buzzfeed.com/txblacklabel/a-dollhouse-built-inside-of-a-guitar-28m7​