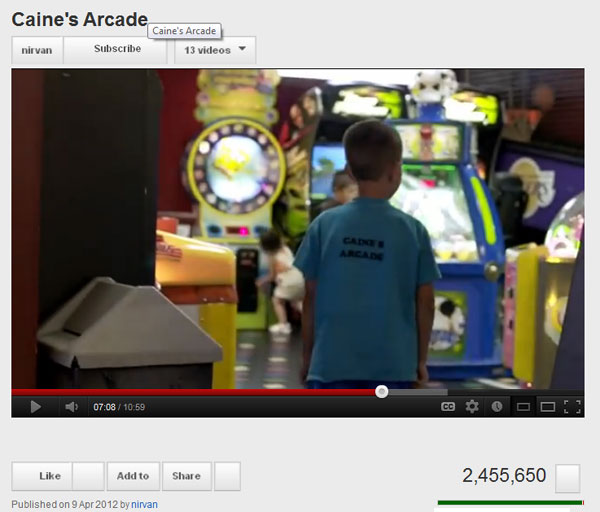 I suspect a combination of the recession and the bafflingly fast tech revolution leaves many of us hankering after better and easier-to-understand times. That might explain these two online hits, combining entrepreneurship and the innocence of yesteryear. First up is the story of Drew Cox, six, who raised $10,000 for his dad’s cancer treatment by selling homemade lemonade on a street stand. Even more of an internet hit is the tale of Caine Monroy, nine, whose cardboard arcade is the subject of viral YouTube video which has raised more than $150,000 for his future eduction. Wow.
http://www.youtube.com/watch?feature=player_embedded&v=faIFNkdq96U

YOU SHALL GO TO THE BALL (Gaynor)

With news earlier this month that Lady Gaga is returning to Britain for her ‘Born This Way Tour’ many people will be anticipating what the songstress will be wearing. Her out there attitude and bizarre dress sense can only mean she has cooked up plans for the most wacky outfits ever. Here this link shows the sketches of some of her tour wear and it features guesses of what the costumes will be made off. I wouldn’t be surprised at some of them…
http://www.buzzfeed.com/amyodell/what-do-you-think-lady-gagas-upcoming-tour-costum

A 12 year old school boy has tore into a BBC executive live on national TV, scolding him for the lack of current affairs programmes for youngsters. The Loretto school boy, said that the BBC were understaimating the intelligence of youngsters, filling their channels and programmes with celebrity focused news, rather than those which deal with of the big news and political events that are currently broadcast on adult programmes. Read more about the grilling in the article below.

Social media site, Facebook, has again been used for more serious matters after the unfortunate death of shark attack victim David Lilienfeld in South Africa on Thursday! David lost his leg in the attack near Kogel Bay, in Cape Town and later died from his injuries. However, the incident isn’t viewed as an unlucky stroke of fate and instead blame has been pinned on the team behind the National Geographic shark documentary “Shark Men”. The Shark Men Facebook page and documentary maker Chris Fisher have been inundated with angry comments from South Africans who blame the shark attack on their use of chum to attract sharks to the area for filming. Chumming is actually banned in the US leading commentators to vehemently writing comments like: “Bloody idiots! Go chum in American waters you murderers! Why is chumming banned in the US? So don’t deny guilt, your hands are awash with David’s blood.” National Graphic has attempted to distance itself from the incident stating that they have not renewed the series-whether this is a direct reaction to the Facebook frenzy is debateable but the case certainly emphasises the power social media sites can have!
http://www.itweb.co.za/index.php?option=com_content&view=article&id=53727:social-media-frenzy-over-shark-attack

WHERE’S PETER CROUCH WHEN YOU NEED HIM? (Scott)

As Friday rolls in many people will be looking forward to letting off steam over the weekend by hitting the dancefloors of clubs across the country. Wonder how many of them will be busting moves like the characters in this ad? Footballer Peter Crouch might be famours for his rather lame robot dance celebration, but he’s got nothing on this lot. When did vacuum cleaners suddenly get so cool?http://mashable.com/2012/04/18/roomba-ad/