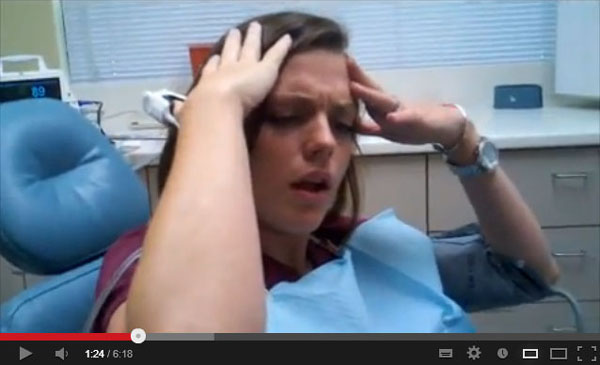 There are a whole host of videos similar to the one I have selected for you today available on the internet, but the YouTube title of this one assures me it’s the original. Either way, there is nothing original about finding the effects of drugs amusing, especially when they have been administered legally. This poor girl is convinced she is still waiting to have her wisdom teeth removed, asserting she’s been awake the whole time and hadn’t noticed anything happening. For this and much more delusion click on the link below, or check out some of the other viral wisdom teeth extraction contributions.

If you think the recent cold snap we’ve been having is bad, have a look at these mocked up photographs of what London could look like if we go through another ice age. That’s right, not just a cold night, AN ICE AGE. It’s all because of Arctic ice melting according to the Government which lead this March to be the chilliest the UK has seen in 50 years. It was also the coldest Easter night since 1917. Although I love the snow and the photos of snow are pretty, I don’t know if I am ready for an ice age.

Oh to be young and rich. The Sunday Times has released its Young Music Rich List and many of our favourite crooners make an appearance. Most of you will not be surprised to know that one Direction make an appearance, with each member now holding on to a £5 million fortune. What is surprising is the fact that the top 10 richest young music stars are all female. Adele leads the troops with £30 million and Cheryl Cole, Leona Lewis and Katy Melua follow with fortunes of between £12 and 14 million, and before we even reach new entry Ed Sheeran and the One Direction lads there is Florence Welch, Charlotte Church, Jessie J, Lily Allen, Nadine Coyle and Duffy. Not for the first time I’m thinking I may be in the wrong industry. Go girl power.

Aftershave brand Old Spice is really raising the bar, quote literally with the recent launch of a line of scented soap. I’m a big fan of Old Spice’s previous ad campaigns and few brands have mastered marketing quite as well as the American ‘mansmell’ company. Old Spice has just rolled out two new, fascinatingly bizarre ads for its Fiji Bar Soap parodying similar ads from the 80s. As ever the brand seem to rocket past the line of absurdity while still somehow managing to keep the product front and center. Bravo!

Mondays – who wants them? They’re the source of direct hatred from nearly everyone, unless you’re job doesn’t take you through the same weekly procession. I try not to fall in the five day vs two day blow out mentality but it can be a hard one to shake – everyday is for the living and all that jazz. But most of you might wonder why we even need the rigid outline of a seven day week – let’s add a day or make up a name for a new day. Well I can tell you that we have the Babylonians and the Jews to thank for Sunday anxiety as they are two of the earliest civilisations to use a seven day week. However, the Ancient Romans shunned this for the eight day week when the eight day was set aside for shopping. Sounds amazing, I’m down like a clown for bringing that back. But then in 46BC the seven day weekbegan to increase in popularity. Ah well, you win some and you lose some. Anyone else want to bring back the eight day week? I might just live in my own space and time.