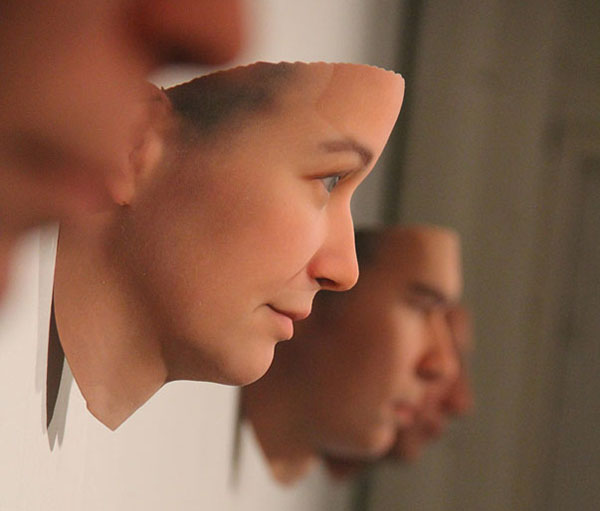 Be careful where you’re spitting that chewing gum out folks, because if artist Heather Dewey-Hagborg gets hold of it you could be the centre her next art project. The American artiste mixes her artistic musings with modern technology by using human DNA samples she comes across while going about her daily life in the city. From random hairs, nails, cigarette butts and chewing gum – we’re spreading our DNA everywhere without even realising it! Heather uses these samples to create 3D portraits of what the person may look like – imagine walking into an art gallery one day and seeing your face staring back at you?

I remember back at school some parents wouldn’t let my friends have pets which is fair enough. Some people are allergic or just don’t like have pets in their homes. But a couple from South Africa have gone one step further to make anti-pet parents angry- by adopting two cheetahs to play with their two toddlers. The three and one-year-old siblings now hug the deadly animals, share their toys with them and ride about the family quad bike sitting next to the feline friends. The part which makes me squirm the most though is that the parents are training them to hunt in hope that they eventually get released back into the wild. Let’s hope they really understand the difference between humans and other live prey.

FELINE SUSHI ON THE GO (Roser)

Some people dress their pets to protect them from the cold, some dress them up with funny tutus or even as a clown but this has really shocked me. A Japanese firm has dressed cats as sushi with its vegetables and rice creating cute images which now are sold online. To my surprise though, this is not just a matter of fashion since with the project the company claims the Sushi Cats, known as Neko-Sushi, are an ancient and mystical creature. Here it’s when I started to be astonished but the new even comes with a video which explains the story of the Neko-Sushi. Japanese culture will never stop to surprise me.

No doubt technology is making our lives easier (for those who know exactly how to use it, of course) but this really freaks me out. Huggies Brazil knows that sometimes is difficult to know when your baby has gone wet himself and has come up with an idea which probably mothers will love. A wee device attached to a diaper, sends a tweet to your mobile phone when the baby has urinated. But it’s even more extraordinary! The application on your mobile phone helps you to take control of when you’ll need to buy more diapers or how many pees the baby does a day. Honestly, I think we’ve lost control of what to create and maybe it’s because I’m not mother but this is too much.

DO YOU FANCY A BLOODY MARY? (Roser)

From posh cocktails to cheap alcohol in a bottle of Cola drunk when we are young, this is the best one. O’Davey’s Pub, a restaurant in Wisconsin, has created this particular drink on honour of Opening Day for the Milwaukee Brewers, a baseball team. Yes, underneath this hamburger, nachos and pickles appears the maybe not really delicious drink. And all this just for a fiver! Well, if you think about it it’s even worth it! Your meal is ready guys.