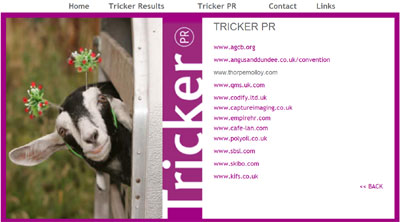 The importance of photography in successful public relations

THERE are some questions that have to be asked when you get up close enough to the person likely to have the answers.

My burning question last week was: “Why was that goat wearing a pair of deely boppers?” The woman with the answers was Aberdeen-based queen of the photocall, Beverley Tricker.

Everyone in Scottish PR knows La Tricker’s work – not least because she hoovers up awards with the gay abandon of the shake’n’vac lady. Thankfully for the rest of us, Beverley is quite happy to share many of the hints and tips which help keep the creative juices flowing at her PR agency.

When I found out she was running a creativity workshop for junior practitioners, I promptly dispatched a couple of our own young staff.  They came back fizzing with bright ideas and desperate to unleash their newfound brainstorming abilities on the first available campaign.

During a debrief the pair excitedly tried to explain how a moment of on the spot creativity led to one of Beverley’s most successful  photo calls – the aforementioned horned farm animal in bobbling head wear.

I never did quite get to the bottom of the story – so here at Holyrood PR the expression “a goat in deely boppers” became a byword for anything inexplicable in the world of PR.

As an award-winning public relations agency, we’re proud of our creative use of photography and make eye catching images an essential part of our daily work as you can see in this showreel:

To find out how your business can benefit from our PR photography and other PR services, there are many hassle free ways to contact us, including by phoning on 0131 561 2244. Or simply fill in the form at the bottom of this page and we’ll get straight back to you.

Much later I found out Beverley was giving a talk at a CIPR event in Edinburgh – on the subject of creative PR on a budget. So, I headed along and finally got the explanation I’d been seeking for so long.

Turns out she was arranging a picture opportunity for a charity which encourages would-be donors to raise money to provide poor African families with goats, sheep or other livestock.

After an exhausting afternoon wearing wellies and herding a dozen wayward sheep and a single goat across muddy fields the photo shoot was in the bag – but it hadn’t yielded the killer image Beverley had hoped for.

If you like content like this, then don’t miss any of the stuff we share. Get the most interesting news, top business insisghts and eyecatching photo straight to you inbox with our weekly newsletter.

Farmer, photographers, Beverley and various PR assistants were all thoroughly fed up and happy to call it a day. Indeed, the only member of the team who seemed to be having any fun was the goat.

So when the beast was loaded into the back of a farmer’s van, it popped its head out between two wooden slats to bleat forlornly at being separated from its new pals.

As quick as a flash, Beverley delved into her handbag, fished out a set of Christmas deely boppers and popped them on the animal’s head. A photographer managed to fire off a couple of quick frames as the van pulled away – and thanks to that  inspired moment, Beverley got the image that came to define that particular campaign.

I never did get the chance to ask why, exactly, she had the deely boppers in her bag, or if she ever got them back – because she promptly launched into a funnier story about the same photoshoot.

Apparently it took what seemed like hours of teeth-grindingly frustrating work to get the a flock of sheep herded from the farm to the appointed photo set, so the snappers could start their work.

Just at that point Beverley tells me the farmer dropped this bombshell: “Stop the photoshoot – we haven’t got the 10 best looking sheep!”

An oldie, but a goody. Then again, maybe she wasn’t joking. After all this was in Aberdeenshire…