The weird and wonderful world of PR – anyone for quidditch? 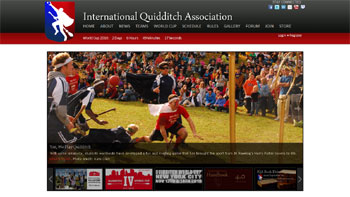 There are times when you see something something so bizarre that it takes you a few moments to fully realise what you’re actually looking at.

That’s how I felt today when I read the news that the 4th official Quidditch World Cup is taking place this week – with 60 teams (yes, that’s right – SIXTY teams) competing against each other on a public park in New York City.

I suppose the first reaction to this is a kind of bewilderment, followed swiftly by an eruption of questions about why on earth anyone would think about participating in a fictional game from a popular children’s book series. And, above all, how is it actually possible play a sport that is supposed to take place on flying broomsticks?

Proving that U.S universities are more insane/awesome (delete as necessary) as the ones over here in Blighty, the answer comes in the form of the International Quidditch Association. Formerd by a group of young sparks who decided that what the world needed most was a literal adaptation of the game J.K. Rowling created for her Harry Potter series, their fledgling movement has grown from its single campus roots so that, now, teams from around the States and overseas meet up to compete in its showpiece annual competition.

This is clearly ridiculous.

While the geek factor of allowing Potter fans the chance to take part in a game they have grown up reading about is commendable, the ugly fact remains that in order to play quidditch, you have to be on a broomstick. Or, more precisely in this case, a toy Harry Potter broomstick designed for children – possibly the least menacing thing you could conceiveably use in a contact sport.

The other big problem is the lack of magical balls that fly of their own accord – a key factor in the game played in Rowling’s fictional universe. Undeterred, the IQA have improvised and turned the elusive golden snitch (you know, the little golden ball that the players have to catch to end the game) into a person dressed in a yellow costume who has to run around trying not to be caught by the participants. Presumably while feeling a little silly.

The amazing thing is that this so-called sport has caught on and there are now teams in most major college and university campuses that regularly play it. They even chalk out specially designed pitches to practice on and there is an official rulebook explaining the many rules and regulations involved in the fledgling sport. Hell, there are calls to try and get it recognised by the National Collegiate Athletics Association – the main body that regulates inter-university sports.

What’s even more impressive is the coverage that these guys have got. Clearly not endorsed by either the Rowling estate or Warner Brothers, these crazy kids have racked up press cuttings and TV hits by the bucketload. Just take a look at the TV piece (above) from CBS News, which provides a handy muggle guide for modern-day quidditch. You couldn’t buy that kind of publicity.

It’s yet to be seen whether this unusual display of fan nerdery will take off over here, but there’s clearly a market for it. We may even have a Scottish Slytherins competing at the finals soon – which is probably the nearest we’d get to a decent Scottish run in a World Cup at the moment…