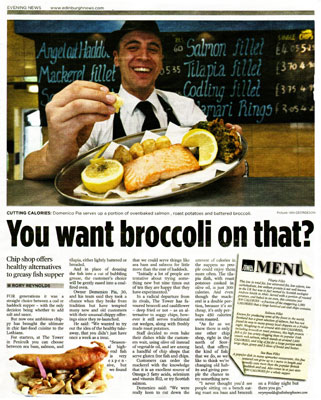 Popular Edinburgh newspaper the Edinburgh Evening News, has featured an article on The Tower fish and chip shop in Penicuik and its healthier alternative to the traditional fish and chip supper.

The article comments on the range of fish offered by the ‘chippy’ which is far from traditional, including seabass, tallapia, salmon and mackerel.  Customers can choose whether to have their fish lightly battered or breaded, providing them with an alternative to the greasy fish often associated with chip shops.

In a radical move to steal a march on their rivals, The Tower offers roast potatoes and fried or breaded vegetables such as Broccolli and Cauliflower as an alternative to chips – although their chunky chips are still an option for customers.

Domenico Pia says in the article: “We wanted to try out the idea of a healthy take away that you didn’t just have once a week as a tasty treat.

“Seasonal high end fish is very expensive, but we found that we could serve things like seabass and salmon for little more than the cost of haddock.

“Initially people are a little tentative about trying something new but nine times out of ten they are happy that they did.”

The full press release can be read at the Edinburgh Evening News website and was secured as part of successful PR and social media campaign carried out by the Holyrood PR.