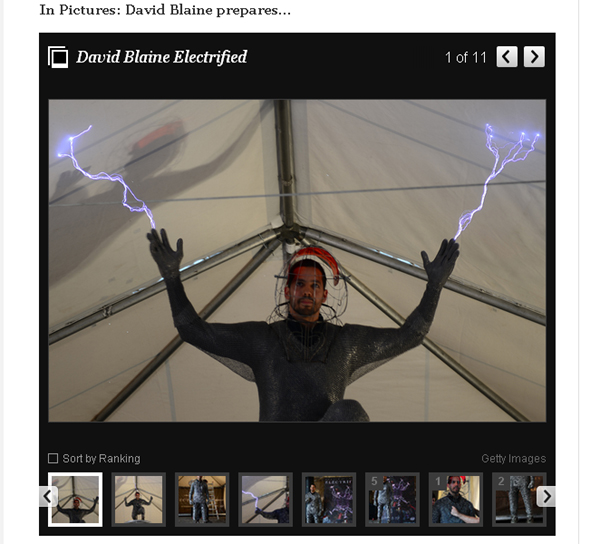 Excited for Blaine’s latest crazy stunt? Will you be taking part in the Mercedes interactive advert this Saturday? Let us know via Twitter or Facebook!

US illusionist David Blaine has announced his latest stunt and it is sure to shock (literally!)
You may remember his past feats of endurance which include his suspension in a glass box in London for 44 days and standing on a pillar for 35 hours in New York.
In true British fashion we tried to sabotage his glass box stunt, with people using a mini helicopter to dangle a cheeseburger in front of the box!
I don’t think anyone will want to be in the near vicinity of this one however – he is to stand for 3 days with 1 million volts of electrical currents surrounding his body and will not be able to eat, sleep or drink for the duration. Just another day in the office then!
http://www.huffingtonpost.co.uk/2012/10/03/david-blaine-electric-currents-volts-stunt_n_1935076.html?utm_hp_ref=uk-entertainment​

AM I ABROAD? (Gaynor)

When I went on a long weekend with friends last week to Newcastle, I was slightly confused to see my network provider on my phone change to EE. I thought that maybe crossing the Border might have caused this to happen you know like when you step of the plane in Spain and it changes to Moviestar? Maybe I was the only one in the dark but it is in fact a new network called Everything Everywhere brought by network providers T-Mobile and Orange. Good news for us EE ‘members’ though because 4G seems to be coming our way first. Now I’m not so sceptical.
http://www.guardian.co.uk/business/2012/aug/20/4g-mobile-internet-everything-everywhere

Despite their slogan stating that you can help yourself ‘as much as you wish’, a manager at an all-you-can-eat buffet restaurant in Brighton has branded two customers “pigs” after they helped themselves to five servings of food in one sitting. The pair are said to have visited the restaurant twice a month taking advantage of their £12 deal, but on this occasion the manager thought that their eating habits were excessive and asked them to not return. Personally I think that if you advertise all-you-can-eat you need to be prepared to cater for those who have, let’s say, an above average appetite.
http://www.bbc.co.uk/news/uk-england-sussex-19817457​

A London butcher shop hyped the release of the latest Resident Evil game instalment sure to have gotten gamers hungry-or grabbing for the sick bucket! Maybe even both!
Wesker & Son opened its doors with a counter full of meat moulded to form all sorts of human parts, ranging from torsos to hands to hanging bits guaranteed to have had men cringe!
A fantastically jaw dropping publicity stunt which from looking at recent reviews, may just outshine the game itself!
http://www.incrediblethings.com/food/cannibalism-is-in-human-meat-market/

This Saturday, motoring giant Mercedes Benz will unveil the first ‘interactive advert’ through a stunt giving Twitter users control of the ending of a new advert.
Cleverly, it will be aired during the commercial breaks of X Factor to ensure high viewer numbers – a great example of a forward thinking company using social media in a clever and innovative way.
http://prexamples.com/2012/10/mercedes-benz-create-an-interactive-advert-which-users-control-via-twitter/