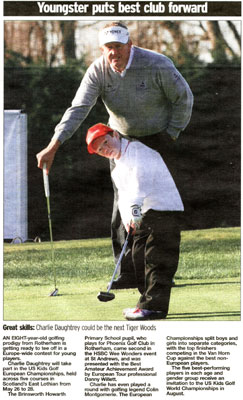 One of the UK’s most renowned regional newspapers, The Star in Sheffield, has featured young golfer Charlie Daughtrey as he bids to become the 2009 U.S. Kids Golf European Champion.

As part of a publicity drive by Holyrood PR, the youngster has appeared in the newspaper in the run up to the prestigious tournament, which will see more than 400 kids from some 30 countries compete in Scotland in May.

The eight-year-old is pictured alongside Ryder Cup captain Colin Montgomerie – the youngster was once selected to play a round with the Scot – in the article, which tells how he was also presented with the Best Amateur Achievement prize by Yorkshire professional Danny Willett at a South Yorkshire awards ceremony last year.

As well as appearing in the newspaper, Daughtrey also featured on the Star’s website and the online article can be read here or by visiting http://www.thestar.co.uk/rotherham/Youngster-puts-best-club-forward.5190227.jp