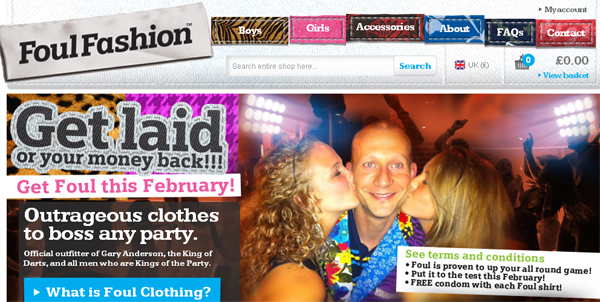 Are you going to accept the Foul Fashion challenge? In need of a Diet Coke break now? Let us know on via Twitter or Facebook.

A real Scottish success story, the Smeaton brothers of Gullane, East Lothian established themselves as the first purveyors of morph suits and have now gone on to launch two sister businesses, garish shirt brand Foul Fashion and novelty golfwear label, Royal and Awesome.
So confident of their pulling power, Foul Fashion has stated that they will give you a full refund if you don’t get lucky with the ladies whilst wearing one of their shirts.
They have launched a quirky video which has knotched up a fair amount of hits since it launched yesterday which is worth a watch.
A distasteful if not rather clever PR stunt which is guaranteed to get people talking!
http://prexamples.com/2013/02/clothes-retailer-offers-customers-sex-guarantee-in-valentines-day-pr-stunt/

Yesterday Umbro revealed a humorously ironic image to mark the end of their long standing reign as England’s official kit supplier. With the tag line “For over 50 years, we just did it”, I probably don’t need to point out that it is in fact Nike who are set to take over. Last night the England team donned their Umbro kits for the last time to play Brazil in a friendly held at Wembley stadium. Umbro’s founder Harold Humphreys once said: ‘There are three things which constitute the ability to succeed – enthusiasm, tenacity and sheer damned cheek – but all in good measure.’
http://www.thedrum.com/news/2013/02/06/umbro-unveils-tongue-cheek-ad-mark-its-last-night-england-official-kit-supplier​

Most of us 90s kids will remember Lil Kim as a curvaceous big smiled beauty who often had odd coloured hair and was not afraid to get her bits out. Not famed for her ‘natural’ looks it was still a shock to see the most recent pictures of her taking a stroll in West Hollywood. The singer was almost unrecognisable due to her lighter and smoother skin which seemed to pull her features towards the edges of her face. However, it was good to see that the breasts were safely tucked away inside a rather conservative, by the divas standards, monochrome ensemble. This is the perfect example of why surgery is bad. Unless you are in witness protection.
http://www.huffingtonpost.co.uk/2013/02/06/lil-kim-surgery_n_2630326.html?utm_hp_ref=uk#slide=870889​

Although I’m not a massive fan of the old Diet Coke, I am a big fan of designer Marc Jacobs so was excited to see that he was talking over from John Paul Gautier as the soft drinks new creative director. Timed to coincide with its 30th Birthday, Diet Coke’s new advert shows Marc Jacobs in a photo booth taking pictures of him semi naked whilst three girls drink Diet Coke and ogle over the images. I have to say for 49, the man is looking not bad at all!
http://www.brandingmagazine.com/2013/02/06/diet-coke-the-hunk-marc-jacobs/

My mind focus is on all things outer space related after enrolling for the ‘Astrobiology and the Search for Extraterrestrial Life’ online course at Edinburgh University.
Well here’s another stonker to land from the deep starry depths – dinosaurs were knocked out by TWO asteroids, not one which has previously been the accepted conclusion.
The infamous space rock that slammed into our core and helped wipe it clean of the roaring beasts may have been a binary – two asteroids orbiting each other. The surprise conclusion comes from a re-evaluation of the proportion of asteroid craters on Earth that were formed from binary impacts. It could also mean it could happen again.
Your underground bunker won’t save you from those bad boys.
http://www.newscientist.com/article/dn23126-dinosaurkilling-asteroid-was-a-twin-terror.html