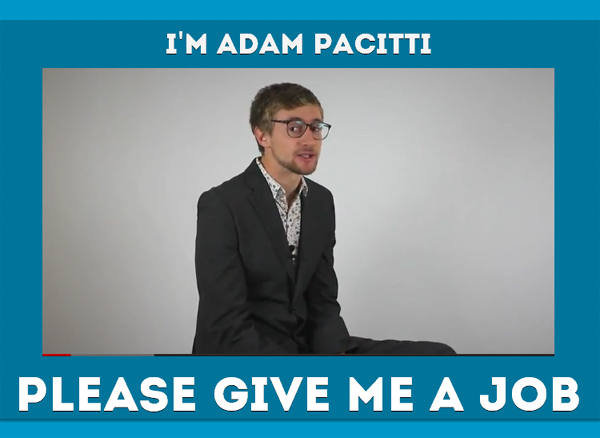 Fancy a night in a glass igloo? Would you employ Adam? Let us know on our Facebook or Twitter pages!

It’s a tough job market out there, especially for university leavers, and don’t we know it.
A 24 year old media graduate from the Isle of Wight, tired of sending out endless CVs to no avail, came up with an ingenius way to attract potential employers.
Adam Pacitti decided to use his last £500 to hire billboard space advertising his services and watched as the image went viral, attracting 7,000 retweets.
Along with his billboard, Adam created a video CV and a dedicated website.
He is yet to receive a concrete job offer but surely this level of ingenuity will attract something in no time – bravo!
http://employadam.com/

We were discussing New Year resolutions earlier and to be honest I’ve stopped bothering and steer away from the old ‘Oh I’m not going to stuff my chops with ten chocolate bars a day’ or ‘I’ll have one glass of wine a night’ style ones. I still don’t technically have one BUT, if I’m to wish for one thing this year it’s to stay in a glass igloo at a resort in Finland which offers views of the Northern Lights. Now that’s what I’m talking about. If this fails then a tree house construction is my next life goal.
Wish me luck or even better help a brother out.
http://www.kakslauttanen.fi/en/accommodation/

It’s probably not the best recommendation when you decide to blog about something you have seen because it automatically makes you think of your mother. But this is, unwaveringly, the reason I have chosen to write to all you lovely people about ‘going paperless’ in 2013. My mother is a chronic recycler who very often manages to recycle the daily paper before my long suffering dad has had a chance to look at it; however Mashable’s tips on going paperless are less about recycling and more about stopping the paper trail before it starts. If you are a small business you can benefit from recycling expertise which can help you reduce the amount of paper waste you produce. For more follow the link below.
http://mashable.com/2013/01/02/paperless-in-2013/​

So we all know that January brings the blues mostly because we are trying to diet as well as being absolutely skint. If you live in America however, you might want to pick up a couple of these beauties which will help the pennies stay in your pocket if nothing else. For only a $1 each you can get a full breakfast in a box, cocktail smoked oysters, dumplings and chicken and even a fish and cheese sandwich.  YUMMY!
http://www.buzzfeed.com/angelameiquan/23-horrifying-foods-from-the-dollar-store-70fn

I have always found it strange when I speak to people when I am abroad who have visited Scotland and tell me that it is one of their favourite destinations.  A lot of Scots seek ways to get out, and barely take notice what is at their back door. I myself have never been inside Edinburgh Castle, which is 15 minutes from my house!
So to hear that CNN have put Scotland as their number one travel destination for 2013 is both strange and great. Scotland came out on top over the likes of Morocco, Colombia, South Africa, Slovakia and Amsterdam. If people follow this news then for the next few years Scotland will be booming with tourists as 2014 bodes well with the Commonwealth Games and Ryder Cup.
http://edition.cnn.com/2013/01/01/travel/top-destinations-2013/index.html