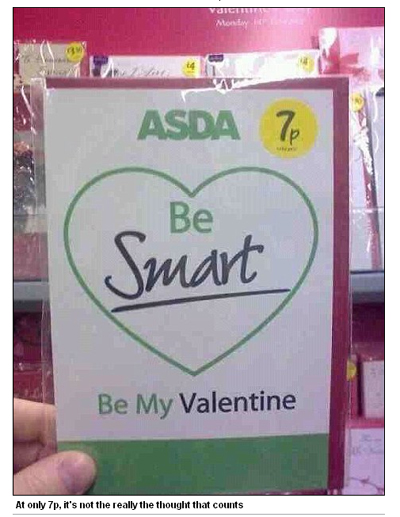 If you enjoyed the team’s efforts today, let us know, or if you have any of your own to suggest, tweet or write on our wall.

A bit skint this valentines? Thinking you can’t afford much? Never fear they always say it’s the thought that counts so why not ‘scrimp’ out on an Asda ‘smart price’ valentine’s card. At only 7p it’s quite the bargain. The card even has a heart warming message ‘my love for you is priceless.’ I personally think it’s quite hilarious however if my boyf was to get me it I don’t know how impressed I would be.
http://www.dailymail.co.uk/femail/article-2095378/Want-dumped-Valentines-Day-Get-half-Smart-Price-Asda-card–costs-just-7p.html

For nearly two decades, the Chemical Brothers mind-blowing audiovisual live shows have played to packed houses and festivals around the world but it has never been captured on film. Until now. So for those who haven’t managed to catch them live yet, this is a MUST! Unbelievably excited for this. The film is shot amongst a  50,000-strong audience at the Fuji Rock Festival in Japan and captures the intense emotions and excitement of the crowds.
The film is showing in Edinburgh tomorrow for one night only so grab your lucky chance. Check out the clip showing a rave breaking out in the Los Angeles screening
http://www.youtube.com/watch?v=1HbmjKJzbWg&feature=youtube_gdata_player

For more info check out the official website http://www.dontthinkmovie.com/

It’s already the month of February and fast approaching is Valentine’s Day. Do you know what to get your partner or give to someone you admire? Why not try out this funky Facebook app which allows you pick your partner, chose why you fancy them, there are some funny answers to that question, and then chose a date to go on. The app is mainly for singles but it can be fun for couples too. Watch the video below and follow the link to try it out for yourself. Who knows you might end up with that special someone on Valentines Day.
http://www.digitalbuzzblog.com/heineken-the-valentines-day-serenade-facebook-app/

As you may be aware (or not) it was World Backwards Day on Tuesday.
One website offered tips on ways to celebrate this calendar highlight which included: writing, talking and reading backwards, wearing your clothing the wrong way round and eating a meal starting with dessert!
After attempting to write a backwards sentence on HPR’s Twitter I realised that it is rather difficult! Or maybe that’s just me…
Anyway when I spotted this girl on YouTube, I thought that she would have been very handy to have in the office on Tuesday as apparently she can repeat any word you say backwards in a nano second!
EMOSEWA!
http://www.youtube.com/watch?feature=player_embedded&v=4O0ubiIYYYY&noredirect=1

Last year we were all caught up in the planking trend that saw thousands of us lie down straight as a plank in precarious positions and post them on our facebook pages. This year it seems that the craze has been replaced by something a little less dangerous…breading. The art of breading encourages pet owners to dress their pets up in slices of bread and post pictures of the furry sandwiches on a dedicated facebook page. With over 10,000 likes the page called ‘putting bread on your cat so people think you have a walking sandwich’ contains some pretty funny if not slightly weird pictures! Not sure if it will be as big as planking but it seems for now that breading is a trend to stay!
http://www.dailymail.co.uk/news/article-2094738/Has-internet-completely-lost-Dressing-cats-BREAD-latest-web-craze.html