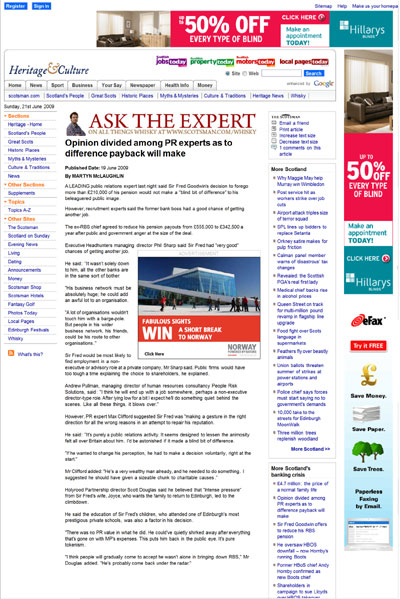 The venerable Edinburgh-based newspaper reported extensively on the decision by former Royal Bank of Scotland boss Sir Fred Goodwin to pay back a portion of his pension.

As part of the detailed analysis, The Scotsman sought the opinion of public relations experts on how perceptions of the disgraced banker might be affected by the payback.

In the wake of the near collapse of RBS, the size of Goodwin’s pension pay off caused widespread public revulsion and furious public and politial debate.

Both experts agreed the only way for Goodwin to have achieved any PR value from reducing his pension would have been to hand back the money early in the debacle.

Douglas also suggested the move had put Goodwin back in the public eye when his fall from grace had been superseded by the MPs expenses scandal.