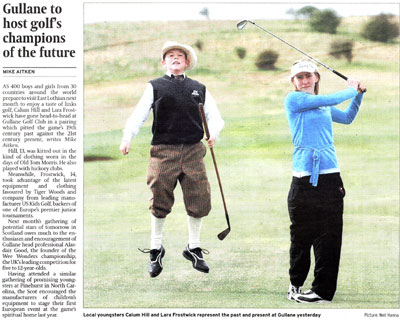 The U.S. Kids Golf European Championship has featured alongside some of the biggest names in golf in the Scotsman, one of Scotland’s leading quality newspapers.

While the world’s best golfers were assembled at Augusta to tee off in the Masters, Europe’s premier kids’ competition was being launched at Gullane Golf Club in East Lothian and the Scotsman featured the U.S. Kids Golf European Championships alongside Tiger Woods et al in its sports pages.

It reported that more than 400 of the world’s top youngsters would be descending on East Lothian in May for the second U.S. Kids Golf European Championships. To launch the event local youngsters Calum Hill, 13, and 14-year-old Lara Frostwick went head-to-head in an old vs new match-up on the historic links.

Calum was kitted out in 19th century golf gear and used hickory clubs from the same period, while Lara benefitted from the latest U.S. Kids Golf equipment, which is designed to maximise the potential of youngsters and allow them to develop sound technique by using clubs fitted to their size.

The tournament will tee off over five of East Lothian’s renowned links courses from May 26-28, 2009. For more information visit www.uskidsgolf.com or to read the full article on the Scotsman website click here or visit http://thescotsman.scotsman.com/sport/Gullane-to-host-golf39s-.5161183.jp