Twisting the order round a little bit here and I’m going to feature my bad pr example first, so here goes! 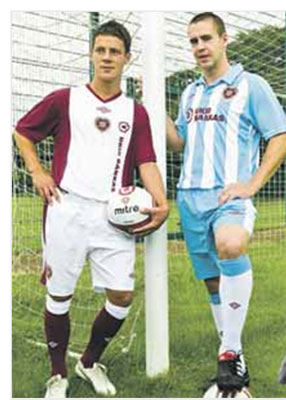 It seems that Scottish football team Hearts have received some bad PR for their new football kit, which is not exactly ‘all white’ by the fans.  The new kit – which is based around the current ajax strip – features a white central panel which is offset by two maroon strips at either side, has caused outrage amonst some of the fans – leaving a divide between those who like the kit and those who don’t.

The release of a new kit is big news for any team and will undoubtedly be the hot topic of any local or national sports desk.  Yet while Hearts released their strip over the weekend, the media coverage has continued early this week, focusing on the peeved fans.

One fan commented in an Edinburgh Evening News article: “I’m all for a maroon Hearts top and I’m not happy that we’ll be walking out in white.”  It seems that the club are pinning their hopes, on the fact that loyal fans will buy the new kits no matter what in order to maintain their up to date support of their team.  One fan even comments in the same article: “I buy a new strip regardless of how it looks.” Yet it seems this time that this isn’t enough to satisfy loyal hearts fans.  As a Liverpool supporter myself, I would be shocked if the club decided to change the familiar red strip to something else.

Perhaps what the club should have done was create some engagement with their fans and ask their opinion on the proposed new strip before they actually gave it the go ahead.  This way any negative publicity would be avoided and fans would feel as if they had some say in their favourite team.  With the popularity of platforms such as Facebook and Twitter, there are no shortages of methods that the club could have used to do so.

And this leads me nicely on to a sports club that deserves a thumbs up for their engagement with fans.  Organisers of Murrayfield’s latest venture Scotland’s Halll of Fame are giving rugby fans a say in who will be first through the new venues doors.

This is a great way of getting fans involved and also cleverly building up interest in the opening of the hall of fame.  It is generally felt that if fans, clients or customers feel as though they have had a hand in a company’s latest venture, they are more likely to support it.  Let’s hope that this is the case with Murrayfield and watch this space to see which Scot was revealed as rugby fans outstanding star.