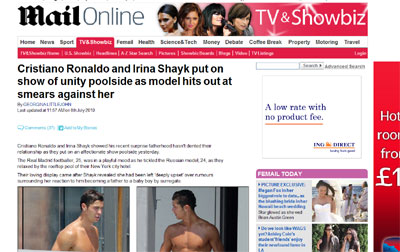 Cristiano Ronaldo is forever gracing the pages of Uk newspapers – whether it’s for his footballing skills, his Armani pants advert or even sunning himself in exotic places on holiday.

His movements are watched by the media’s eye every day and just to throw a spanner in the works, he announces he’s a father on Facebook.

Mystery of the baby’s mother began to circulate and it seemed that no-one even knew he had a girlfriend…and then another wrench is thrown into the mix.

Turns out his girlfriend isn’t the mother and the baby has been born with a surrogate – so now the focus has been moved to her and her “recation” to the news.

On his Facebook page, Christiano wrote: “It is with great joy and emotion that I inform I have recently become a father to a baby boy. As agreed with the baby’s mother, who prefers to have her identity kept confidential, my son will be under my exclusive guardianship.”

And now he’s been photographer poolside in New York with his girlfriend whilst his bouncing baby boy is allegedly at his home in Algarve.

So he’s played this pretty well hasn’t he? Doing it through Facebook as opposed to telling his agent and having a girlfriend but using a surrogate. Result? Publicity galore. 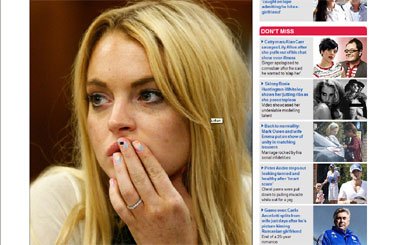 A lot of movie stars who are brought up in the world of Hollywood are rarely out of trouble – and Linsay Lohan is no exception.

After she was sentenced to 90 days in jail after breaching her probation, it was revealed that she had written a swear word on her finger nail and every photographer in the court room could see.

The picture was plastered all over the press and despite her reportedly saying:  “I am not taking this as a joke. This is my life. It is my career. It is something I have worked for all my life,’ the actress pleaded. I don’t want you to think I don’t respect you and your terms.” in court, her finger said otherwise.

It’s been a rollercoaster ride for the young star whose life has been documented from a young age and this example of her making news for the wrong reasons is just another to add to a lengthy list.