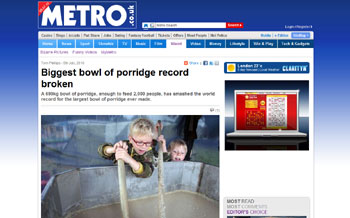 Top marks go to Scott’s Porage Oats, whose public relations team have scored a big success in most of today’s national newspapers.

The company staged an event in Scotland over the weekend to create the world’s biggest bowl of porridge, and the Monday dailies have been chock full of pictures and reports of the record-breaking attempt.

It’s a simple premise but a nightmare to pull off without a lot of careful planning, so the work of the Scott’s team should be rightly applauded. They not only managed to bring along ex-Lib Dem leader – and local MP – Sir Menzies Campbell to help stir the enormous vat of porridge, but also plenty of hunky chaps in kilts to keep the red tops’ female readers happy. Oh, and there was the small matter of actually breaking the world record as well.

Whether or not the stunt helps sell more Scott’s products is yet to be seen, but there has certainly been enough sponsorship and subtle product placement to maximise the PR exposure for the brand. 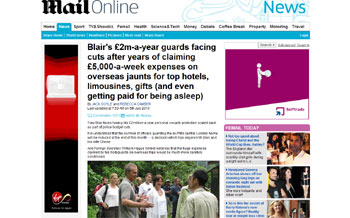 Oh dear, oh dear. Just as the Metropolitan Police are starting to improve their reputation and restore some much needed confidence, another PR problem rears its ugly head.

This time, the papers are going mad over the fact that the Scotland Yard is providing a round-the-clock security team for former Prime Minister Tony Blair – at an enormous cost to the taxpayer.

It’s a difficult one to call, this, as there’s no doubt that such a controversial former PM is in need of protection – particularly in his current dangerous role as a Middle Eastern peace envoy. However, the fact that these bodyguards are being provided at a cost of £2 million a year to the taxpayer, are regularly put up in 5-star hotels and submit hundreds of thousands of pounds in expenses when guarding the ex-statesman on official business is a bitter pill to swallow.

The real PR problem here is that it’s especially grating as Mr Blair currently earns around £15 million per year from his various roles and positions – more than enough to cover the cost of security himself, yet the Met is effectively paying it for him instead.  And even though the Tory government has now announced big cutbacks in the protection team in an attempt to regain some credibility and respectability in the eyes of the British public, it may be too little too late.

Of course, Tony and Cherie are also reported by the Daily Mail to be “angry” about the cuts to their security – but I doubt many taxpayers will be too bothered about that particular revelation…