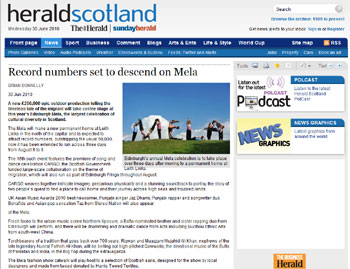 I’ve not usually paid much attention to the Edinburgh Mela in the past – mostly because I’ve never really been wowed by its PR presence. I mean, I know it’s there and I’m aware that it’s an important multicultural event in Edinburgh but, for some reason, I tend to find out about the event after it’s actually taken place.

However, my eye was definitely caught by the festival’s teaser image this year – which was displayed in the news pages of The Herald. Using a range of multicultural performers to spell out the word “MELA” the festival has created a visually-attractive and striking image to capture the attention of their potential audience.

OK, so it would have been even more impressive if the image had appeared in a slew of Scottish newspapers and websites, but that shouldn’t detract from the PR success of the image. A sizeable lead in the news pages of The Herald is certainly not to be sniffed at – and I can envisage plenty of follow-up opportunities to use the image in promotional materials and press packs nearer to the event.

Sometimes good PR images don’t have to be original. The “getting lots of people to pose as words or images” thing has been done plenty of times before – not least by Talk Talk and British Airways in their TV adverts. However, the key is for the images to work and -ultimately – get coverage.

There are plenty of award-winning PR images that never see the light of day in newspapers or magazines, so the Mela organisers should be rightly proud of this one. Nice work. 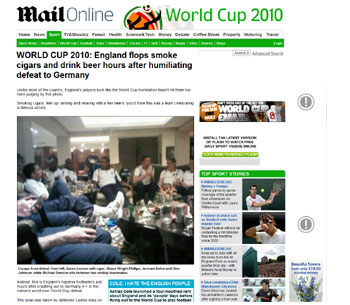 As if things weren’t bad enough for the England team at the moment. Their 4-1 humiliation against Germany is still fresh in the mind, most of Britain is viewing the entire team as overpaid, underperforming primadonnas – and what happens? They only go and leak a picture of the squad enjoying beers and cigars following their dismal World Cup performance.

Now, footballers shouldn’t have to live like saints, and there’s an argument here that the Mail, Sun and every other paper that ran the story are just fuelling the ire of the public somewhat. Sitting and enjoying a quiet drink after an exhausting game (whether you win or lose) isn’t unacceptable – although you get the impression that the media seem to want the whole squad to break out into self flagellation and monastic penance to attone for their performance.

However, the problem here is more that one of the team foolishly took a picture of the post-match beers and cigars session. Although intended as a personal photo, the fact that it was taken on a Blackberry meant that it always ran the risk of being leaked, uploaded or accidentally sent to another phone – which, surprise surprise, is exactly what happened.

Not the smartest of ideas, really, and a major PR disaster for the FA, considering the dark mood of the English football fans at the moment. They really didn’t need another reason to resent their fallen idols.