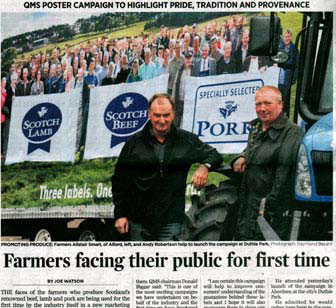 Meat hit the headlines in more way than one way thanks to Lady Gaga’s controversial dress at the VMA’s, so Quality Meat Scotland did well to get the column space they did. Launching their new marketing campaign featuring the farmer’s who produce Scotland’s beef, lamb and pork, QMS managed to grab the attention of a number of the Scottish dailies.

With the food industry under increasing pressure to prove their produce is unique and traceable, QMS have played their new ‘Behind the Label’ campaign well giving customers a better sense of the faces behind their Sunday roast. Over 250 posters featuring more than 100 farmers, their sheepdogs and tractors will be used across Scotland to promote the local produce, creating a ‘farmers market’ style buzz about shop bought meat.

Numerous farmers attended the launch in Duthie Park, Glasgow with the help of Miss UK Katherine Brown – QMS’s ambassador – who added a little glamour to the events!

The campaign aims to emphasise the tradition and heritage of Scottish farming not to mention the high standards maintained by all their local producers. Meat producers have often come under fire in recent years so it’s great to see a PR campaign that gets back to the industries roots and promotes whats best about Scottish meat. 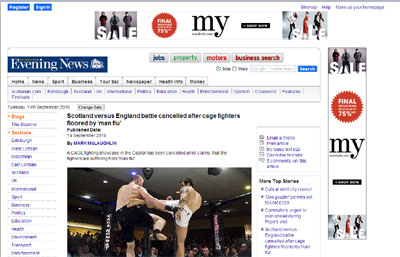 Cage fighters aren’t exactly renowned for being delicate little flowers, so when the forthcoming “Bannockburn: Part II” Ultimate Fighting event was called off you would have thought the promoters could have worked a bit harder on their excuses – fabricated or not! According to the Scottish side the fight was cancelled due to a bout of “man flu” in the English team…yes those big, burly cage fighters have been struck down by a case of the sniffles.

Meanwhile the English promoter blamed “missed deadlines”, and even some of the Scottish participants dismissed the rumours of man flu sweeping the camp. Either way the whole thing screamed of a PR stunt gone wrong; whilst a bit of joking about Auld Enemy rivalries is always worth a shot the “man flu” line lacked imagination and style. Worst of all it makes the whole set up a bit of a farce!

Not since Alex Reid paraded in ladies smalls have cage fighters been portrayed in such a sketchy way and surely it’s not the image they are looking for. Time to rethink the angle…