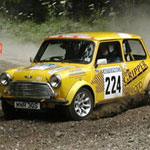 It’s another Mini adventure – BMW the owner and manufacturer of the Mini brand has announced the Mini return to rally driving.

Over the years the cult status of the Mini has been greater then that of any other car brand. Not many cars have the privileged of being driven and coveted by generations of celebrities, while even having in which it played the leading role.

For many rally fans the return of the Mini will undoubtedly instill excitement and pleasure at watching this great little car fight for the championship.

Under the bonnet the Mini will hold an aggressive 1.6-litre, four-cylinder power pack, supercharged engine, along with the nippy handling associated with today’s Mini’s.

BMW are making a smart move into unleashing the Mini back onto the motor rally circuit – the car is built for this kind of driving and will undoubtedly be enjoyed by both driver and spectators.

While the BMW Mini has been an ongoing success story, it is vital they keep consumers interested in the brand.

Lidl in a lot of trouble – low cost supermarket chain Lidl have had to pay out over 7500 euros in a defamation case.

The case came about after a five year old boy from Dublin accused a Lidl shop working of defamation of character, by wrongly accusing him of steeling from the shop.

The incident occurred in his local Lidl while shopping with his mother – the shop assistant grabbed the boys arm in accusation of him stealing.

The courts heard how this action caused concern to the child, through which he has suffered injury to his reputation.

This case highlights the ability of such cases to be taken to court and won – Lidl’s apparent lack of knowledge and crisis management implemented within the company, which has left them open to litigation.

Comments Off on My fast-paced first week at Holyrood PR

Comments Off on My fast-paced first week at Holyrood PR