The Good and the Bad From Today’s PR in Scotland 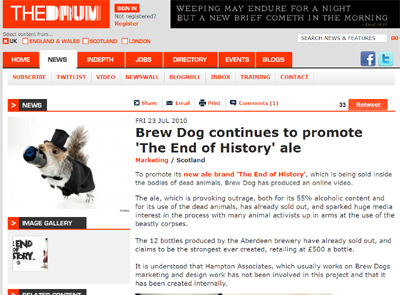 Drinks Company Brewdog are well known for their gimmicky and often outlandish PR stunts to advertise their innovative beers and brands – their last major product release ‘Sink the Bismarck’ caused a media storm with their children’s playground ‘my beers stronger than yours’ argument with a rival German beer company.

They strive to be a unique and individual brand which does not aspire to conformity and their latest beer The End of History is a drink that perfectly fulfils their company mantra.

The blonde Belgium style ale made with juniper berries and nettles is a PR hit in itself with an ABV of 55% it is the world’s strongest beer.  Yet this doesn’t seem to be enough for managing director James Watt and his team, who have gone that extra mile to ensure that the drink goes down in history – the bottle is packaged in the customer’s choice of stuffed stoat or squirrel.

The furry packaging has uncorked pints of PR hits featuring in many of the Scottish National newspapers and also drinks and trade press.  It is a talking point for many and the £500-£700 price tag also fuels the debate on whether the beer is worth sampling or even buying.

The shock tactics employed by the company may cause them to come under fire from animal rights groups, yet throughout the careful marketing campaign Brewdog have ensured that potential customers are informed that the animals used are road kill and were not harmed for the purposes of drunken enjoyment.

Personally it is a drink that I myself would not buy – the cuddly bottle would not be the most desired accessory on a night out, but it is another nice piece of PR that ensures the Brewdog name remains in the public domain – no matter how stoat-ious they get! 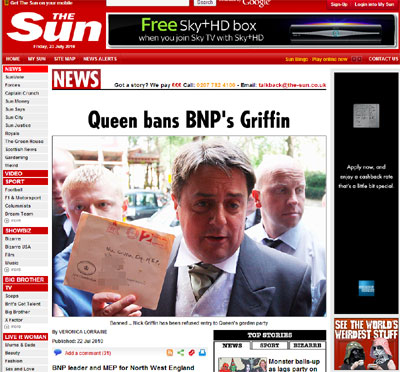 One of the biggest PR stories over the past two days has been the very public snub that Nick Griffin received from the Queen at this year’s Buckingham Palace Garden Party.

The BNP party leader who is famed for his controversial and extreme far right views was probably not at the top of the Queen’s invites but in order to maintain the foundation of democracy that this country rests on the Palace made the difficult decision to invite him.

Yet in a move that made every PR expert in the country squirm, Mr Griffin went on to devalue his invite and use his attendance at the garden party for political purposes.  The party leader was seen to be bragging live on GMTV’s breakfast show and he even posted a highly inappropriate post on his party website reading: “Tea with the Queen:  your suggestions required.”

This moved was viewed by the Palace as a stunt to: “blatantly politicise (his) attendance” and also a move which increased the security risk at the event.

Although PR seeks to get key messages into the public domain using as many channels as possible to create an expanding patchwork of your organisations voice and reputation, there are boundaries and rules of good practice that need to be followed.  This was an unacceptable move made by Nick Griffin as it undermined the already generous invitation and also it shows the egotistical and one sided mentality of not only himself but the party he represents.  Next time you decide to go bragging about your social life Nick, it may be best that you don’t count your chicken’s before they’ve hatched!