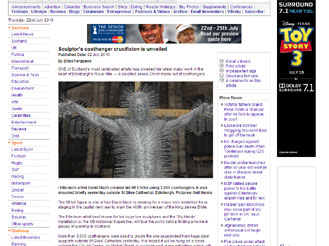 There are many things in life that will undoubtedly draw attention to themselves – and a nine foot silver sculptor made of 300 coat hangers is one of them.

He’s no stranger to big-scale projects (think the red brick heads on the M8) but this one is not only striking but shocking, not to mention quite terrifying.

The “Jesus” figure looks like he’s screaming in pain (as one would imagine) and the coat hangers which look like nails sticking out his body add to the instant intensity of his work.

And just for dramatic effect it was hung outside St Giles Cathedral for a while just so everyone could see its true power – because photos sometimes just aren’t enough.

It’s appeared in almost every Scottish newspaper thanks to a combination of shock and enormity, combined with wonder and amazement – it’s achieved exactly what the Fife-born artist set out to do.

No-one will be forgetting that figure anytime soon, even if it is in nightmares. 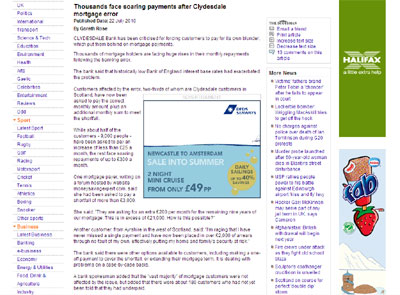 A giant “whoopsydaisy” could be heard from the Clydesdale Bank yesterday as it emerged they’re asking its mortgages customers to pay more in their monthly payments because of their error.

This did not go down well with the apparent 18,000 customers affected who are being asked to pay an increase of between under £25 to £300 a month – or in one big tidy sum of allegedly more than £3,000.

Clydesdale Bank said the error was worsened with the Bank of England’s low base interest rates but at the end of the day, its customers are paying for their blunder.

At a time when the public’s confidence in banks, the economy, the government (the list could go on) is at an all time low, the last thing companies want to do is anger their customers.

It’s a bad move by Clydesdale and their public profile will probably suffer because of it. Although the press will probably quickly highlight another bank’s blunder and they might get off the hook, for a while.