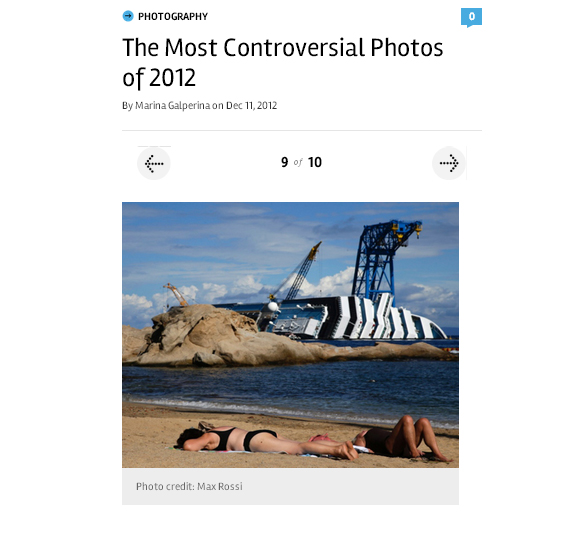 If you were equally as enthralled with these images or fancy yourself a Tailly then let us know via Facebook or Twitter!

Unless you have been living under a rock for the past year, you will no doubt have seen these photos in the media, some of which are light hearted and some raised serious questions about the ethics of photojournalism.
The gallery leads with the hugely scandalous New York post front cover image – the infamous, ‘DOOMED’ which features a man seconds before he is hit by a subway train.
The image of (hunky) New York Jets quarterback Tim Tebow is my favourite, and it took me reading the explanation below to understand its controversy.
Very thought provoking.
http://www.flavorwire.com/354414/the-most-controversial-photos-of-2012-2 ​

TOO KOOL FOR SKOOL (Gaynor)

If you haven’t already you need to check out the Telegraph’s pick of the coolest offices in the world. Red Bull, Innocent and Mother all made the top ten list with surroundings which you could probably live in. My favourite has to be Red Bull, why take the stairs when you can take the slide!
http://www.telegraph.co.uk/finance/jobs/9640237/Top-10-coolest-offices-in-UK.html?frame=2383638

Have you ever lamented the fact you did not have a tail? I can’t say it has ever been persistent want of mine, owning a tail, however the design of a device called Tailly implies that for others it is a longstanding desire. Not only have Tailly created tails to look like those that belong to your favourite household pet, they also respond as such. Using sensors built into Tailly’s belt, the device reacts to your heart rate and responds accordingly. So, when you get excited your tail might wag a little faster than when you’re just hanging around the house. Weird, but kind of cool – I can’t help wanting to give one a go. It could be a good purchase for that friend or family member who already has everything, or the hard to buy for person who is too fussy. At least then next Christmas you would know whether they REALLY like your gift or not.
http://mashable.com/2012/12/13/tailly/

I severely regretted upgrading my iPhone onto the ios5 software a few months ago and immediately mourned the loss of my beloved Google Maps.
The genius mapping programme has got me out of many a disorientated situation in London, New York, Berlin, Stockholm and on home turf, so when Apple replaced Google Maps with their own version which was utter pants I was pretty annoyed.
Apple CEO Tim Cook took heed of customer feedback and on Wednesday, added Google Maps back onto iTunes for download.
Phewww!
http://www.huffingtonpost.com/2012/12/13/google-maps-iphone-app_n_2290035.html?ncid=edlinkusaolp00000009 ​

Kickstarter is a great site for the creative nuts to get their pieces of genius off to a flyer – thanks to our generation donations.
It’s got everything on there from those for pure entertainment to those which connect with some a little deeper in us.
‘Portraits of same-sex military couples’ is one of those with the drive to give a space to the homosexual military community to be accepted in US history for the first time. Tatjana Plitt photography project of same-sex military couples from across the U.S is set to help repeal against the Defense of Marriage Act (DOMA).
DOMA prevents the military from recognising same-sex couples and means they aren’t entitled to many of the benefits, support and rights their heterosexual counterparts automatically receive.
When you think these soldiers are fighting for the freedoms they themselves can’t even enjoy, it seems completely ridiculous and unjustified.
http://www.kickstarter.com/projects/1289221135/gay-warriors-portraits-of-same-sex-military-couple?ref=home_popular