The Best and Worst of Today’s PR in Scotland 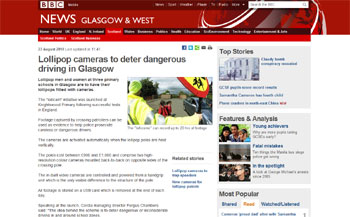 It was touch and go between this story and the impressive display in the Daily Mail about Elgin City’s giant striker Paul Miller – but the Glasgow lollipop men have just shaved it.

In a brilliant “why haven’t they ever thought of that before” moment, lollipop men and ladies in Glasgow have been equipped with special lollipops that contain a tiny CCTV camera – to collect evidence of dangerous driving near schools.

Apparently the technology has been trialled South of the Border, but this latest test is the first time that the special lollipops have been used in Scotland. What’s even more impressive is the wave of PR that has swept through today’s papers about the scheme, with almost every title reporting favourably on its merits.

Lollipop men and women often get cruelly overlooked for the vital role they play in keeping roads safe, so it is a great achievement by their media team to keep the issue in the public mind and secure so much positive coverage. Impressive indeed. 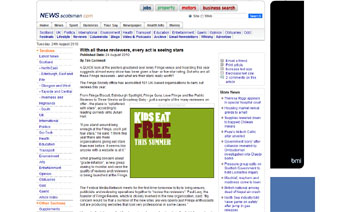 Oh dear – it looks like the sheenanigans of comedians and performers at the Edinburgh Fringe have been finally exposed in the Scotsman today.

As if charging £15 plus for a ticket wasn’t bad enough, many comedians insist on putting reviews from previous years festivals up on their promotional posters. So, a two-star show in 2010 will still be emblazoned with the five star review quotes from the same performer’s 2007 show – bringing chaos and confusion when it comes to choosing what show to watch.

Of course there’s the obligatory defence from an established comedian – in this case the IF Comedy Award-winning Brendon Burns – but it kind of rings a little hollow when you consider how many acts indulge in this activity each year. A bad news day for Fringe performers.

Oh, and before The Scotsman writers get to act all smug about their scoop there’s a further sting in the tail from this story. In addition to exposing the awfulness of the Fringe, the paper spectacularly lets itself down by GIVING A 5 STAR GRADING TO ITS OWN REVIEW TEAM.

That’s right – it actually says that in order to get the best review for a show, you should just read the Scotsman rather than, say, the lacklustre, sub-par reviews in established Fringe magazines such as Three Weeks. Or the Guardian, presumably.

Comments Off on Swimming lessons return with a splash in Orkney

Comments Off on Swimming lessons return with a splash in Orkney