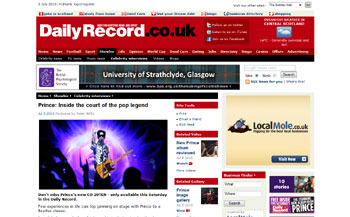 The papers have been filled with stories about the latest album release by megastar Prince today, which in itself isn’t that much of an unusual story. What is impressive, however, is the fact that the new CD is being given out exclusively in the Daily Record – and yet every other media outlet in Scotland is still covering the story.

It’s a big coup for the Record and will no doubt see thousands of extra readers picking up a copy of the paper purely for the album. And it’s also a big PR win for Prince himself who, let’s face it, hasn’t had a decent album out since Sign o’ the Times.

Of course, this stunt has been done before by Prince. Just three years ago he released an album exclusively with the Mail on Sunday in a move that was widely considered to be a huge advertising and PR success. Renowned for his dislike of the music industry, the pint sized pop star has opted to shun a conventional album launch again and it’s highly likely that the 2010 giveaway will be just as popular.

It’s good to see a Scottish title getting in on the act with a genuinely impressive giveaway and a tie-in with a legendary musicial talent. You just have to hope that the album stands up to scrutiny and provides an even bigger PR success for them. 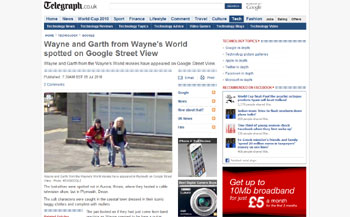 It’s difficult whether to decide whether this is a PR disaster or a cleverly managed viral success – but I’m going to opt for the former when discussing the latest developments with the controversial Google Street View service.

The internet giant hasn’t had the easiest of rides so far during its attempts to photograph every major town and city in Britain, not least from many commentators in the red tops and mid market tabloids who have condemned it as an invasion of privacy.

However, what Google no doubt intended to be a useful tool for web users to view has now become the target for every practical joker across the country to try and usurp. Just weeks ago there was Horseboy in Aberdeen and there have been numerous other instances of weird and wonderful sights appearing on street corners just as the camera car appears.

Now, the latest example of tomfoolery has seen two scamps in Plymouth become the latest Google stars – as they were snapped in full Wayne’s World costumes. Of course, Google is so rich and powerful it won’t mind a bit of silliness from a couple of guys dressed as Wayne and Garth, but I’m sure deep down they’ll be unhappy at the sheer amount of people who are trying to dick about on their Street View images.