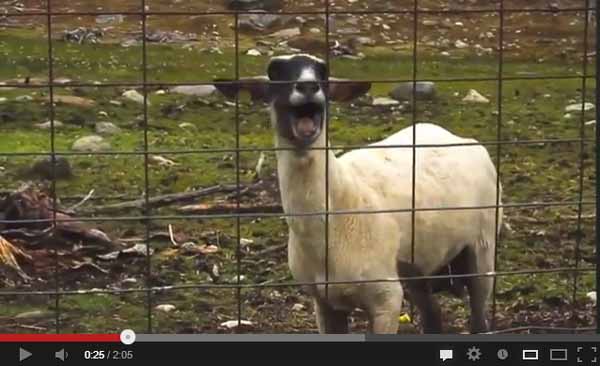 You might no be a big fan of goats, you may never even have seen one in real life, but you do need to watch this clip. Two full minutes of goats yelling like humans, it’s irritating and rather unnerving not to mention annoying but hilarious and fascinating at the same time. This super cut compilation of goats yelling like humans has racked up more than 6.5 million hits since it was posted just a few weeks ago. Pointless yet enthralling for reasons I cannot fathom, it’s sure to get you through your Friday afternoon.

I hate the bus, I do. I hate that it takes ages to get anywhere, but what I most hate it the wait for it to actually come along, and it seems I am not the only one. Qualcomm, a next generation mobile technology company, has made arguably the best bus stop experience ever. Travellers were encouraged to visit the URL on posters placed at several bus stops. I’m not going to say anymore, you should just watch this video…

YOUTH DRIVEN OFF THE ROADS (Sarah)

According to an Auto Trader survey quoted in the Huffington Post, young people are being driven off the road thanks to the ever increasing cost of motoring. With many drivers fearing the annual cost of driving could double to as much as £4,580 over the next 10 years, they believe it would be extremely difficult for young people to buy a car in the future. As a young driver myself, I couldn’t agree more.

A video has surfaced online of a young girl in court over what I think to be drug abuse. She looks very cocky and arrogant standing in-front of the judge, and is then told she will need to pay $5000 and do community service. The girl doesn’t appear to be fully focused and is even questioned if drugs are still in her system, and after the judge makes his verdict, she walks away and something is said, and the judge calls her back. Check out what happens when you mess with the judge!

So now that we have all accepted that horse seems to be a staple supermarket favourite, are you ready for the next food blunder? Bird salad. A couple were enjoying a romantic candle-lit dinner when they discovered a dead bird nesting down in their salad. If the pictures don’t make you wretch then image chewing on feathery beaks instead of rocket and lettuce leaves like this unlucky diners almost did. Experts say salad is good for you but I think I am starting to disagree.