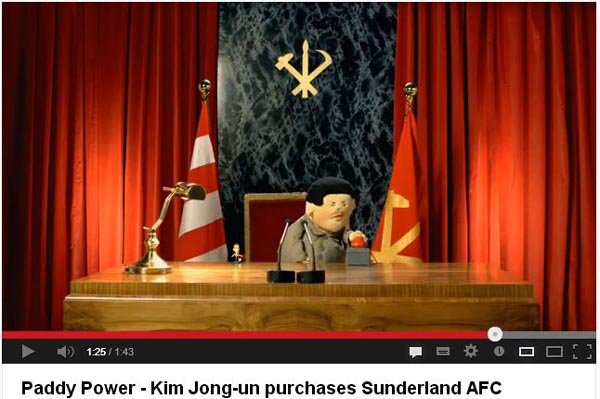 We’re almost googly-eyed staring at our screens for wonderful web-tales, fancy getting in on the action? Hit us up on Facebook,Twitter, Linkedin or Google + with your contribution.

Kim Jong Un has outlined his latest plans to ensure Sunderland’s survival in the premier league. In the latest campaign stunt from Paddy Power we see the dictator run through his tactics to help Sunderland avoid the drop and moreover his demands that must be adhered to by the rest of the teams in the league. The puppet version of the world’s most deluded leader even shows his loyalty to Thatcher, ordering a one minute silence in respect of the controversial politician before going on to say: “Ok I’m bored…lets fire some missiles!”.
Another stormer for the Paddy Power team I think.
http://www.youtube.com/watch?feature=player_embedded&v=vCX5wWhuhgQ#!

As a vegetarian who does not eat fish, I would not be quite sure of what to expect from the innards of a squid. However it seems pretty clear from this article on the weird Asian news website, that live explosives are not the norm. Discovered by a Chinese fishmonger, the bomb-eating squid is said to have been caught in the waters off China’s Guangdong providence. The fishmonger suspects the squid ate the bomb thinking it was a tasty smaller fish. Once the police were informed the bomb, which was about 8 inches long, was safely detonated. I cannot promise no squids were harmed in bringing you his story.
http://www.weirdasianews.com/2013/04/15/squid-china-media/

DOG BRANDED A HERO BY THE RSPCA (Rebecca)

A nice, uplifting story for your Friday morning! This 7 year old Jack Russell, named Barbie saved her owner from her bed when it caught on fire. The owner, Mrs Fields aged 72 woke up and realised the fire due to Barbie licking her face – this was obviously an attempt from the dog to wake her owner when she sensed the danger. The dog will be receiving an award from the RSPCA at a later date.
http://www.telegraph.co.uk/news/newstopics/howaboutthat/10003767/Dog-given-bravery-award-for-saving-owners-life.html

I’M STICKING WITH YOU (Melissa)

So, twin children that wear matching outfits. Cute right? How about a husband and wife who have worn matching clothes for 35 years. Nancy and Donald Featherson have over 600 outfits between them that Nancy has made herself using her dress making skills. Not only is it their eccentric style that makes them interesting, Donald, 77, created the plastic pink flamingo lawn ornament in the 70s. He also proposed to Nancy on their first date in 1976 so he must have seen something special in other before he discovered her flare for fabulous fashions.

Jason Dufner attended a charity event following his win at the Byron Nelson Championship the previous year. An image was taking of the golfer where he sat on the floor of the Salesmanship Youth and Family Center in Dallas, his back propped up against the wall with his hands resting underneath his legs. The photo has turned into an internet craze with many people posing as the golfer as well as incorporating this stance into another viral sensation – the Harlem Shake. Many fans have retweeted the image and golf watchers have been seen imitating him on the course.
http://www.examiner.com/article/jason-dufnering-goes-viral-video