on behalf of Lubiju, cosmetic dentist 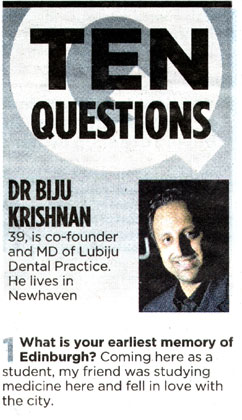 He may have studied in Dundee, but it is Edinburgh that holds a special place in the heart of Dr Biju Krishnan, the co-founder of holistic dental agency Lubiju, and he opened his heart to the popular Ten Questions column in the Edinburgh Evening News recently.

Biju spoke about how Arthur’s Seat means so much to him, how he often enjoys going for quiet walks or runs around it. And that’s only part of his sporting regime with squash, badminton, rugby and cricket all being sports he likes to participate in as well.

But he showed his more romantic side to the question of what would make his perfect day when he said that it would start with a champagne breakfast with partner Deborah, followed by a walk around Arthur’s Seat, an east/west fusion massage at Lubiju, then some light tom yum soup for lunch at Dusit. After that he would take Deborah shopping in Harvey Nics and have some dinner at the Kitchin.

And just as he’s giving with his time for his partner, he also modestly reveals that his best moments are when he sees the changes Lubiju can make to people’s lives. As he says:

Changing someone’s teeth may seem like a small thing but it can genuinely transform a person’s world – it can make them more confident, more attractive, have people interact with them more. It’s also a source of pride for me that Lubiju also has its own dedicated massage and complementary therapy treatment room.