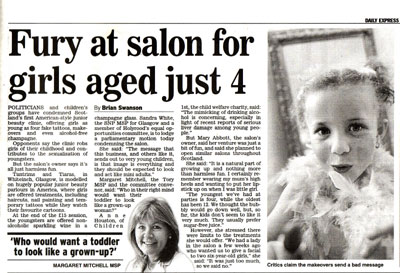 There are certain jobs and certain people that, quite simply, should never be put together.

So my sympathies go out to Brian Swanson at the Scottish Express.

In a long and distinguished career, Swanny has covered just about everything, including brushes with the bizarre and the downright wacky.

But it must have been a particularly surreal moment for the grizzled veteran of the Fourth Estate when he was asked to pull together a story about an MSP kicking up a fuss over “beauty salons” for girls as young as four.

Margaret Mitchell, a Tory MSP, was putting the boot into a new business in Glasgow, called Tantrums and Tiaras.

She was left frothing after someone brought to her attention that wee girls were attending this “salon” with their friends to enjoy playing with make-up, perfume and fake tattoos.

As if that wasn’t bad enough Iron Britches Mitchell was even more outraged that these youngsters were being further corrupted – by being served a sparkly drink in a Champagne-style glass.

Not content with stirring up the media, La Mitchell – a member of Holyrood’s equal opportunities committee – was intent on lodging a parliamentary motion about this outrageous affront to public decency. It appears the shameful antics at Tantrums and Tiaras “robs girls of their childhood and contributes to the sexualisation of youngsters”.

I could have sworn that when I was under 10 (way back in the 1970s) all the kids were playing with “fake tattoos”. Except in those days we still called them transfers and they came in lucky bags or bubble gum packets.

Unless I am suffering from false memory syndrome, I’m pretty sure that wearing transfers didn’t condemn participating youngsters to a life of sexual objectification.

Mibbes I’ve also got this wrong, but isn’t there a long, celebrated and (dare I say it) fun British tradition of wee girls dressing up in old clothes and shoes belonging to their mums or older sisters?

I was under the impression that “dressing up boxes” were a staple of childhood – and that allowing girls to play with the odd bit of make-up and perfume (with the proper supervision) counted as some of the best fun they could have.

Call the cops! My daughter will often sit at the dinner table and ask if she can have her diluted apple juice in a wine glass, to be more like her mum. Frankly, it doesn’t matter how we serve it – it’s still apple juice.

I don’t really blame the Express for running the story since a row is a row – and after all I read every word of this because I find the views espoused by Mitchell not only inflammatory and ill-informed, but verging on offensive.

I fervently hope that Mary Abbot, the owner of Tantrums and Tiaras, hasn’t suffered any adverse affect to her business – though I suspect she’ll be fine, because any sane, well-adjusted parent will know that what she offers is harmless fun in a safe environment.

The old saying has it that no publicicty is bad publicity,  so with a bit of luck, the story might even have given her a bit of unexpected and positive PR in Scotland.

I couldn’t give a toss for Margaret Mitchell, who sounds to me like the really dangerous, mal-adjusted villain of this entire piece. Any bandwagoneering, knee-jerking politician who is prepared to twist schoolgirl fun into a contrived piece of anti-paedophile posturing deserves a humping at the polls – so I hope there is one coming her way.

As I stated right at the outset, my sympathies in this case are with Brian Swanson.

Swanny is blessed (and I’m sure that really is the correct term) with seven children – every single one of them a daugther. If there is one man in the whole of Scottish journalism who knows the futility of trying to stop wee girls from playing at being big girls, then it must surely be our man at the Express.

So, spare a thought for him. After penning this article about the allegedly corruptive influence of clothes, perfume and make-up on young girls – he still had to return home and face seven daughters. Ouch.