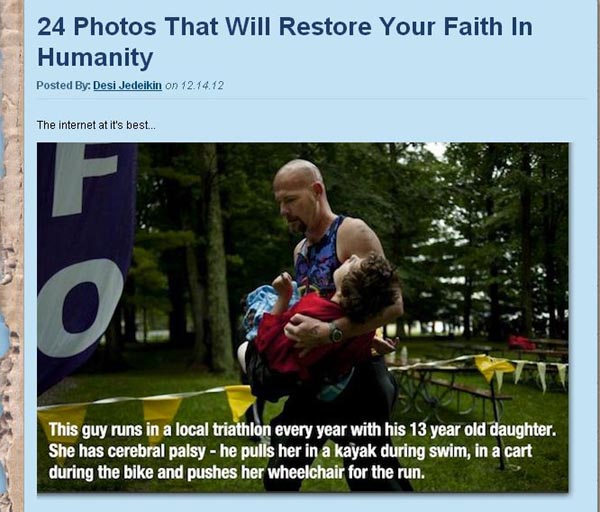 With all the recent sad press about the shootings in America, a nurse committing suicide after a prank, and the never ending threat that the world is going to end this month, sometimes it’s good to look back on things that will help restore your faith in humanity and realise that there are extraordinary people out there. This list of pictures showcases such great unselfish acts by unknowns to those who are less fortunate. They range from a man covering a homeless man with an umbrella during a heavy rain fall, to someone leaving money on a vending machine for someone to get a drink for free. All of these, which showcase the good side of life.

After copious amounts of alcohol was consumed at our Christmas party on Friday I think it’s safe to say that the team were probably in need of some type of hangover cure on Saturday morning. According to a study by Boston University, 25%-30% of people are actually resistant to hangovers. I think it’s safe to say I’m definitely not one of these people.
http://www.guardian.co.uk/lifeandstyle/2012/dec/17/which-hangover-cures-should-try

I’m rubbish with keeping my mitts on small electrical goods. I’ve had a phone drop into a pint of cider, down the pan, under a van – a similar fate which claimed the life of a mp3 I’d only just uploaded tracks to. Ruined my day and maybe my week.
But imagine if you could repair these things using your left over chinese takeaway. Sounds mental but Paulo Goldstein has made that happen in his project Repair is Beautiful in which he restores a collection of broken objects.
Watch as he restores an iPod bought on ebay for just $10 back to health using a set of spare rib bones. The man has skills.

Since the Mayan’s are convinced the world will end this Friday there has been a constant buzz of chatter surrounding the impending Armageddon and what better opportunity for a bit of apocalyptic marketing.The Drum has put together the top 10 campaigns of firms attempting to cash in on the end of the world. Featuring the “Mayan End of the World Autoloan Special” from an American credit union that states repayments are unnecessary, should we meet an untimely demise. Restaurant chain TGI’s are hosting The Last Friday and should this entire saga prove to be another myth then we can all purchase some “I survived the end of the world: December 2012” merchandise.

So for all your apocalyptic needs look no further.

In the next five years the capabilities of your Smartphone are set to increase drastically, to incorporate the ability to rely information relating to all five of the human sense; sight, hearing, taste, smell and touch. IMB say that in the next half decade computers will be far more aware of the world around them and that they will be able to understand it far more comprehensibly than they do now. The five senses are really all part of one grand concept, cognitive computing, which involves machines experiencing the world more like a human would. For more on information, and for an explanation of why cognition does not equal intelligence, follow the link below.