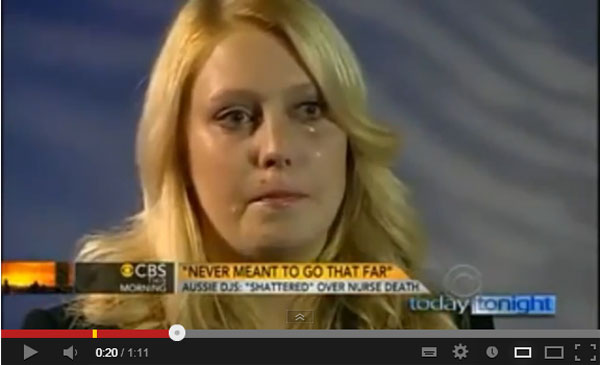 If you want to find out more about Holyrood PR why not visit our Facebook and Twitter pages.

TIME TO HANG UP ON PRANK CALLS (Aimee)

I reckon most of us have cracked open the Yellow Pages and chosen a random victim for a wind-up. Prank calls made it big with TV shows like Fonejacker and have been a hit on radio shows since the 1950s.
But, no one expected the tragic outcome of Sydney-based 2 Day FM’s call to Jacintha Saldanha. Nobody knows the full circumstances of her death, I certainly suspected there may have been more going on whether professionally or personally that may have added to her obvious despair.
The BBC has asked if this has called the end to prank calls – there won’t be many radio shows thinking about calling a pranky any time soon I’d suspect.
In my opinion prank calls can be a bit of harmless fun but it is completely down to the scenario and those involved.

It is no secret that I love dogs…and what better than dogs dressed in tiny outfits? Especially tiny Santa outfits!
So my festive offering to you today is a gallery filled with dogs, you guessed it, dressed as Santa.
You’re welcome!

With the end of the world imminent, or so we’re being told, it’s no wonder that developers have been cleverly constructing state of the art complexes for those with big plans and fat wallets. Creator, Larry Hall has converted an abandoned Kansas missile silo into a state of the art survival complex that can house up to 70 people. Luxury and safety combined these condo’s are not merely for the wealthy to ride out an epidemic for a few days. Oh no, these condo’s surpass some of the most luxurious hotels and accommodation known to mankind, well us “commoners” at least. The accommodation provides everything, including a 5 years supply of long-life foods and an indoor farm which will provide fish and vegetables for 70 people for as long as they live. Entertainment wise, Larry has installed an indoor beach-like pool, a library, a movie theatre, a spa, an arcade, and a gym. Plasma screen walls will show various views such as the Paris skyline or a beach in the Maldives. The condos are fitted with numerous televisions and Hall has installed a system which stores thousands of movies. There will also be a school to educate children and a hospital. The vast and deep unit will be donned with top-end appliances, walk-in closets, a kitchen and dining room and two living rooms to avoid arguments about what to watch on television. If you ask me these folk have more money than sense and would be much better off doing something more worth while with their cash. Why anyone would want to live beyond the end of the world is beyond me, trapped underground to live out the rest of your days, no thank you.

A six year old girl from Philadelphia has taken part in a groundbreaking medical trial to try and combat her Leukaemia using a disabled form of the HIV virus. And it looks like it’s worked. Emma Whitehead was entered in the trial at the Children’s Hospital of Philadelphia as a last resort by her parents, who were faced with the fact that her organs were expected to start failing within 48 hours. The experiment, which took place in April, used a disabled form of the virus that causes AIDS to reprogram Emma’s immune system genetically to kill cancer cells. Despite the fact the treatment had never been used for children, or as a cure for Emma’s particular type of Leukaemia, she survived the treatment and seven months later is still in complete remission. Science truly is fantastic.

It’s that time of year again. Google Zeitgeist has revealed the top search terms for 2012. Unsurprisingly Whitney Houston has topped the list after she passed away back in February. Others on the list included Usain Bolt, Andy Murray and Jessica Ennis after a stunning year in British sport. The most popular search question was ‘what is love’, ah so people still don’t know!