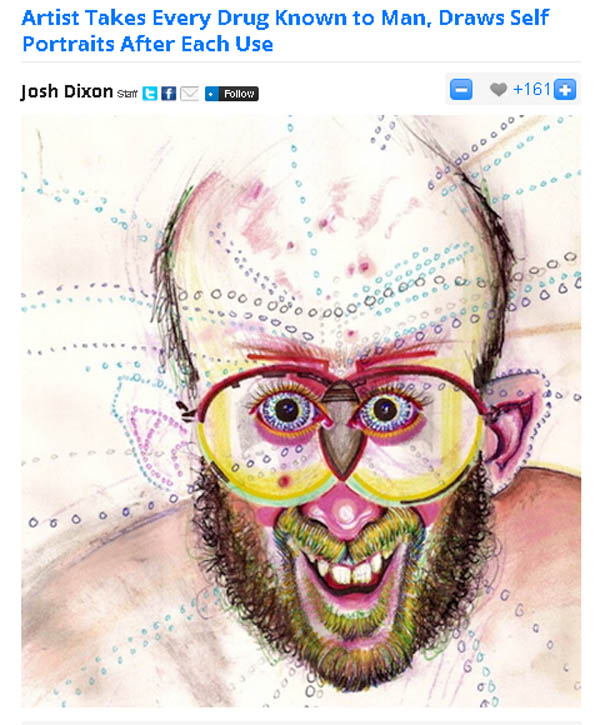 What would happen if an artist snorted, sniffed or smoked every drug known to man and drew his self portrait after each hit? You need not wonder because that is exactly what Bryan Lewis Saunders did! The Washington DC based artist consumed everything from mushrooms to cocaine to the old cannibal inducing bath salts to stir his artistic talents! Being ‘off yer chops’ in the art process might seem extreme-it did result in mild brain damage, but the results are undeniably fascinating!

Nestlé have put a spin on Willy Wonka’s Golden Ticket prize and brought it into the 21st century. The company has distributed 6 Kit Kat bars fitted with GPS tracking software across the country. When opened the bars automatically activate the embedded location software, allowing winners to be tracked down within 24 hours and handed a cheque for £10,000. The ‘We Will Find You’ campaign, whilst creative and interesting has received criticism for being menacing and somewhat ‘creepy’, with the Huffington Post likening the campaign to Charlie and The Chocolate Factory meets Taken. What are your thoughts?

PLAYBOY MINUS THE BUNNIES (Gaynor)

Hugh Heffner has enjoyed many years of bringing ‘pleasure’ to the masses and it seems he is not about to stop now. Playboy has launched its very own wine club, one of the very first internet based initiatives by the company. Members of the club can enjoy selected tipples from around the world from the most exclusive vineyards as well as a full case of wine being delivered every quarter. The most exclusive thing about it all is it is only available to US residents. And there is not a bunny in sight…maybe it is growing up.

If you didn’t manage to get your hands on the new iPhone 5 over the weekend, don’t worry as there is a clever way for you to get your digits on it, well for you ladies anyway…
The Daily Nail blogger, who did 365 different nail art designs in one year, has painted her talons in honour of the latest Apple gadget, with different app symbols on each finger.
The detail is incredible – and even if you think it is a step too far, you can surely appreciate the skill.

FROM HEDWIG TO HEROIN (Sarah)

From a wizard in the grips of adolescent turmoil, struggling with the dynamic established with his Potions master, to a look at class warfare, prostitution, heroin addiction and teen sexuality – nothing could have prepared the world for JK Rowling’s latest creation and first foray into adult literature after the phenomenal success of her Harry Potter series – if the snippets leaked online are to be believed, that is. Although the text of her latest creation, entitled The Casual Vacancy, has been closely guarded, exerts have appeared on line, hinting that this latest publication is to be kept far from the eyes of impressionable youngsters. Never one to read a book purely because of the author, especially if the said author is breaking into a new genre, I have to admit I’m tempted to order myself a copy of this one.