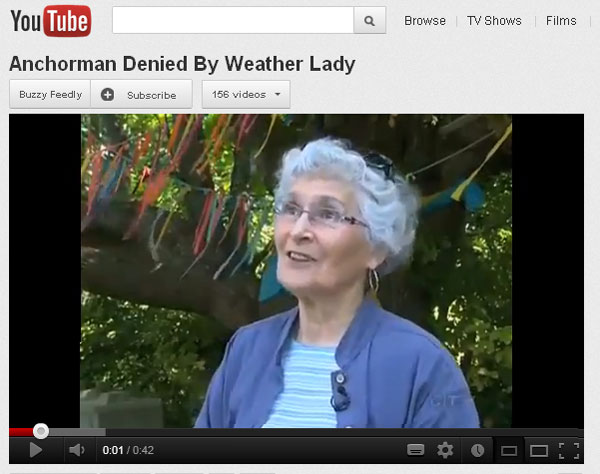 During an interview with an elderly woman, the journalist talks about canoodling. There is a little joke made and then the cameras cut back to the anchorman waiting to introduce the weather girl. He asks if she would like to ‘canoodle’ before she reveals the weather, only to be shut down by the shocked weather girl. The anchorman was then informed by his producer the meaning of canoodle and is overcome with embarrassment at having thought it meant chat. This is definitely one for their blooper reels.

I’m not a massive fan of the royal family, possibly the biggest understatement I am yet to make on here, but I quite like Prince Harry. Yes, I think he is inappropriately privileged, I do not condone the special treatment he and his family take for granted, I can’t stand the obsession the media have with him, but….I can’t help but love him for getting naked in Vegas. The furore this simple act of birthday-suit embracing has had is remarkable, and the world seems to have had it’s knickers in a right twist since it the Prince stripped off. And when the Sun published the pics, well, there was uproar. My favourite outcome of the whole debacle has to be, however, the Facebook group entitled ‘Support Prince Harry with a naked salute’, which over 12,000 people have now joined. So, all together, ‘Harry – we salute you’. P.s. You don’t HAVE to be royal. Rebel.

I’ve spent 25 years in the traditional media, the last decade in PR. I know these are tough times for journalists and I know the world of PR is also adapting to some seismic shifts. But I also know that none of those changes wipe out the decades (in the case of newspapers it’s centuries) of learning, skills and good practice in either of those professions. While I love social media, I get fed up hearing the over egged claims of those former salesmen, finance worker, recruiters, shelf-stackers and warehouse managers who now ply their trade as ‘social media experts’. So I find myself applauding this piece by the Ad Contrarian, a successful social media entrepreneur who also happens to run a $100m-a-year advertising agency. He’s spent the past five years debunking the most outlandish claims of the social media set. In simple terms, social media is new and must be included in any new comms or marketing strategy. But replacing what came before? Not so far.

Despite the disappointing debut of Facebook’s public listing, the declining value of it’s shares and concern over it’s long term revenue streams, the Silicon Valley giant has announced plans for a radical new HQ. It has been announced that celebrated architect Frank Gehry will design a mammoth campus in Menlo Park, CA to house 2,800 of the firm’s engineers, called ‘Facebook West.’ It will become the largest open plan office in the world and will encompass a roof top park complete with walking trail and field – and a skateboard route complete with ramps for employees to get to one end the campus to another.
View preliminary designs here:

THE FIRST LADY OF SLAVERY (Gaynor)

A Spanish magazine seems to have cocked up big time when it photo shopped a picture of first lady Michelle Obama onto a portrait of an African slave from the 1800’s. Although the image wasn’t meant to be offensive in its message, online viewers have found the image fairly offensive and racist. The original message of the image was meant to be inspiring as it was originally published six years after slavery was abolished. The article of the title does a little better in clarifying the message with it translating to Michelle granddaughter of a slave, lady of America. Let’s hope Michelle can see it in a positive light.