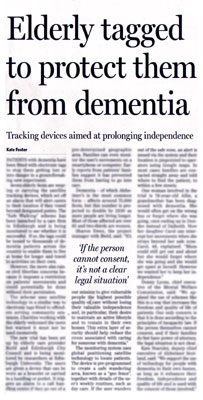 Bield received coverage in the Scotland on Sunday with news of an groundbreaking experiment designed to prevent dementia sufferers from getting lost or into danger.

The trial which was set up by Bield and the Edinburgh City Council will see seven patients fitted with electronic tags for the ‘Safe Walking’ scheme which will be monitored closely.

If the scheme is a success the tags could be issued to thousands of dementia patients across the country to enable them to live at home for longer and travel to activities on their own.

Users are given a device that can be worn as either a bracelet or carried in a handbag or pocket and will trigger an alarm to a call handling centre if they go out of a pre-determined geographic area.

Families can even monitor the user’s movements on a smartphone or computer and early reports from patients’ families suggest it has prevented them from having to go into care.

The coverage was received in the Scotland on Sunday on behalf of Bield thanks to a PR Scotland campaign with Holyrood PR.