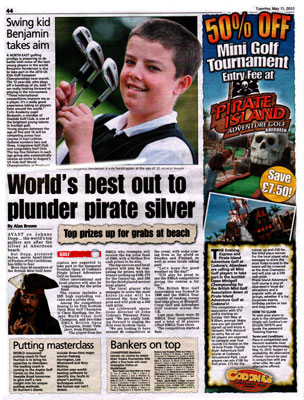 The Aberdeen Evening Express has covered the US Kids Golf Tournament in an article focused on a contestant from the area.

As the granite city’s main evening paper, the report details 12-year-old Benjamin Henderson who is described as “one of the brightest young talents in Scottish golf”.

This year’s tournament saw competitors from eight different countries – including the small central American nation of Guatemala – battling it out for the European Championship title.

The competition – played over Gullane No. 2, Gullane No. 3, Craigielaw Golf Club and Longniddry Golf Club – was organised by the U.S. Kids Golf Foundation, which aims to promote the game of golf to young players and their families around the world.

The full article was printed in the Aberdeen Evening Express and was secured as part of a successful PR and social media campaign carried out by the Holyrood PR.