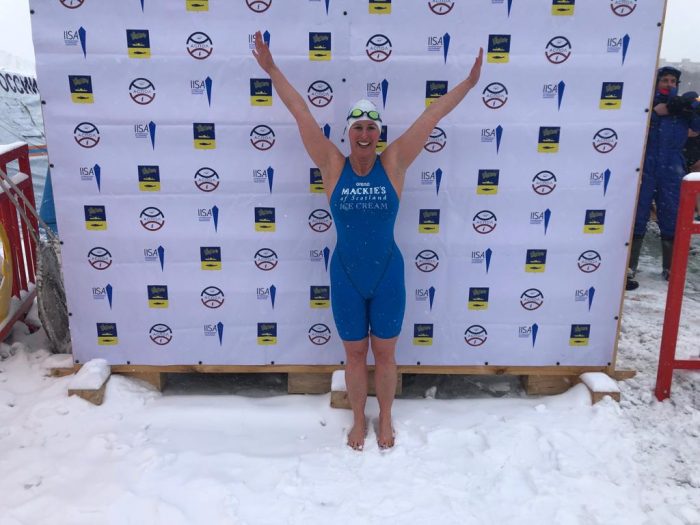 BRITAIN’S record-breaking ice swimmer is flying home from Russia with gold medals under her belt after competing in the 2019 World International Ice Swimming Championships.

Swimming in a pool that had been cut out of the ice with a chainsaw, Jade Perry, 36, was the oldest swimmer in the top ten by ten years after her stellar performances in the freezing pool.

The Helensburgh-based swimmer won first place in her age group for the 1km ice swim, with a time of 15 minutes and 2 seconds, and came first in the 50 metre front crawl with a time of 31 seconds.

Ahead of her competition in Russia and other exciting challenges throughout the year, Jade successfully secured a year-long sponsorship from luxury ice cream brand Mackie’s of Scotland.

The competition pool in the Russian city of Murmansk was 0 degrees Celsius and outside air temperatures were between -4 to -8 – colder than a household freezer.

The rules of ice swimming dictate that competitors must wear regular swimming costumes, and wet suits are not permitted.

With over 400 swimmers from 32 countries taking part in the competition, Jade, who was ranked 12th among the women to begin with, finished 9th overall.

Jade said: “Before heading to Russia, I’d never swum in such cold water – they were fishing ice out of the water between swims. 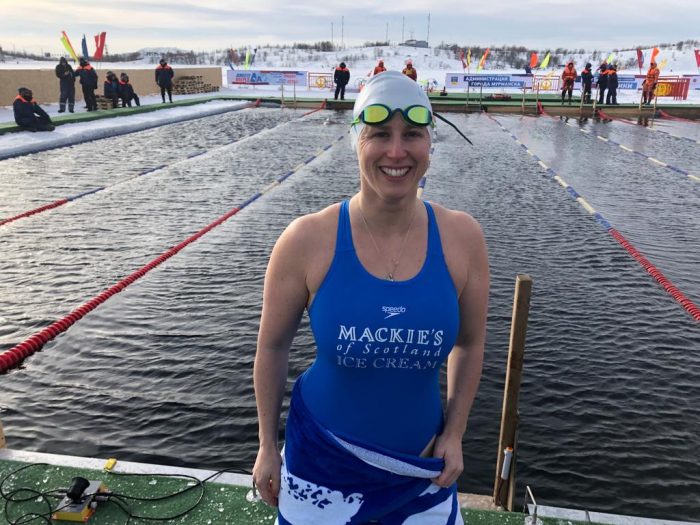 “I was nervous before heading out, but the support that I’ve had from friends, family and Mackie’s has kept me motivated.”

Jade is the women’s British record holder for the fastest 1km ice swim – a title she took home in Hatfield, Doncaster in February 2018. She braved 3.6 degree Celsius water, with a time of 14 minutes and 55 seconds.

Jade added: “Ice Swimming is such a new sport in Britain, and so isn’t funded in the way that more established sports are – so having Mackie’s get behind me is amazing.”

The temperatures are so extreme, that once out of the icy water, competitors will often experience a phenomenon called “after-drop” where the body reacts to the cold exposure and can trigger violent shaking.

Karin Hayhow, Marketing Director at Mackie’s, said: “We’re proud to support Jade’s progress as we admire her bravery and determination – and her love for the cold! 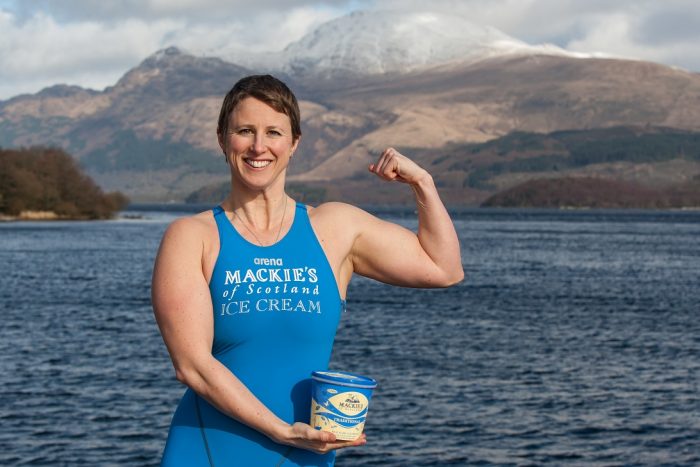 “The temperature in Russia was cold enough to keep our ice cream rock solid, but this doesn’t stop her from challenging herself.

To put the temperatures into perspective, when you think a swimming pool is on the cold side, it’ll likely be no less than 30 degrees C.

Originally from Hockley in Essex, Jade moved to Scotland for its abundance of open water so that she could train more easily.

Anyone interested in learning more about ice swimming and the risks involved can read: https://www.outdoorswimmingsociety.com/risks-cold-water/

CAN OUR TEAM OF FOOD AND DRINK PR EXPERTS HELP YOUR BUSINESS?