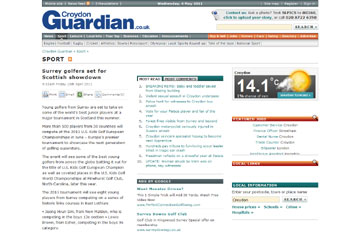 The biggest junior golf tournament in Europe has receives another boost to its PR after being featured in a range of local Surrey newspapers.

The U.S. Kids Golf European Championship – which is being held in East Lothian this month – was featured on the websites of some of Surrey’s biggest newspapers including the Croydon Guardian, Streatham Guardian and the Richmond Times.

The papers highlighted how eight youngsters from Surrey were travelling to the competition, where they would take on hundreds of the world’s best young golfers aged between 6 and 18. The players will compete for the title of European Champion, while also aiming to secure places at the prestigious U.S. Kids Golf World Championships at Pinehurst later this year.

You can read the reports on the Coydon Guardian, Streatham Guardian and the Richmond Times websites. All of the coverage was secured thanks to the expertise of Holyrood PR PR in Scotland.