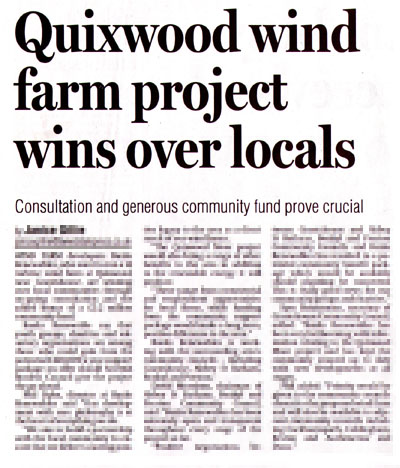 A major renewable energy developer has announced that there could be up to £3.2m available for a community benefits package should planning for a wind farm go ahead in the Borders.

Banks Renewables is committing to work in partnership with local people in Berwickshire and the surrounding areas to deliver a potential community fund, as part of its Quixwood Moor Wind Farm project.

Crucially, the fund – the largest of its kind in the Berwickshire area – would be used to target local issues that are identified by local people.

It would run for the 25-year lifetime of the wind farm, with communities having a say where funding should be directed.

Phil Dyke, Director at Banks Renewables said “Our development with care philosophy is at the heart of everything we do.”We aim to build a partnership with the local community to ensure that we deliver a lasting positive legacy to the area as a direct result of our wind farms.

“The Quixwood Moor project would also bring a range of other benefits to the area in addition to the renewable energy it will produce.

“These range from commercial and employment opportunities for local firms, while funding from the community support package would make a long term, positive difference to the area.

“David Morrison, Chairman of Abbey St Bathans, Bonkyl and Preston Community Council, said: “Banks Renewables has been extremely open and transparent throughout every stage of the project so far.

“Positive negotiations between Grantshouse and Abbey St Bathans, Bonkyl and Preston Community Councils and Banks Renewables has resulted in a potential community benefit package which would be available should planning be consented. This is really good news for our local community groups and charities.”

This coverage was secured with the Berwickshire News as part of a sustained PR campaign carried out by Holyrood PR on behalf of Banks Renewables.