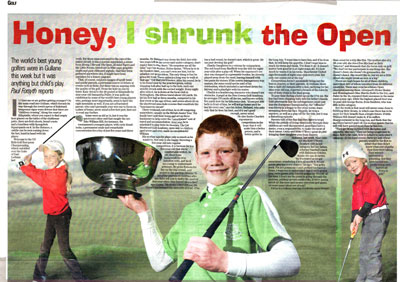 The highly-successful U.S. Kids Golf European Championship has been rounded off with an impressive write up in Scotland on Sunday.

The event concluded on Friday and Scotland’s national Sunday newspaper devoted the centre spread of its highly regarded sport supplement to a report on the tournament.

Headlined, Honey, I shrunk the Open, the in-depth report focuse in particular on the skills of players in the younger categories – including eight-year-old boys champion Charlie Daughtrey, American Mychael O’Berry who competed in the girls’ nine-year-old section and the youngest player in the tournament, five-year-old William Hill.

The well-thought out article, by Paul Forsyth, looked at the dilemma of parents, who want to encourage their kids without appearing to be over pushy.

And the journalist found many well-balanced families who want their kids to have fun – while also learning sportsmanship, discipline and etiquette.

Forsyth’s article also makes it clear the quality of the golf on display was outstanding.

The full Scotland on Sunday article is available online and is a fitting culmination for a highly successful PR in Scotland the UK and Europe. The public relations was handled by Holyrood PR, PR in Scotland.