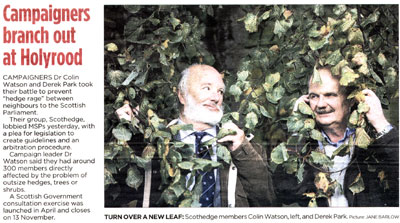 Scothedge campaigners Dr Colin Watson and Derek Park hit the headlines in Edinburgh’s Evening News after taking their battle to prevent “hedge rage” between neighbours to the Scottish Parliament.

The leading Edinburgh paper reported the fact that the Scothedge group lobbied MSPs with a plea for legislation to create guidelines and an arbitration procedure.

Campaign leader Dr Watson told the newspaper that around 300 members in the Scothedge group have been directly affected by the problem of outsize hedges, trees or shrubs.

The full article can be read in the Evening News.

Scothedge enjoyed a hugely successful media photocall and subsequent PR coverage due to the professional services of Holyrood PR, PR in Scotland.